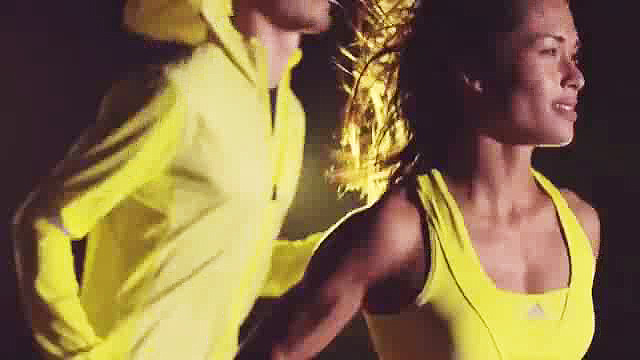 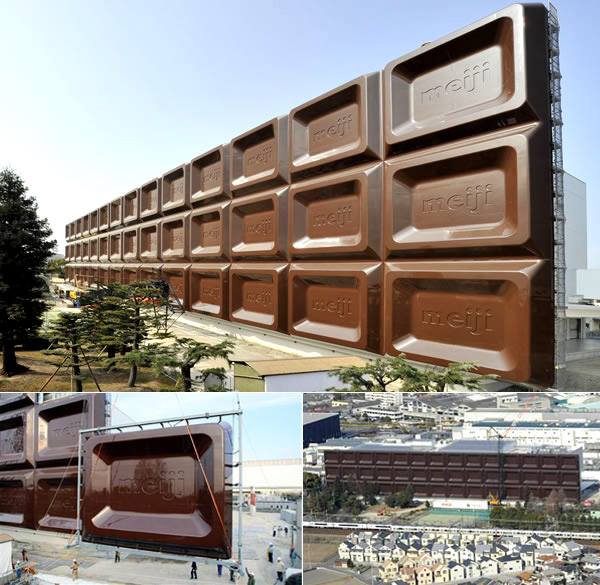 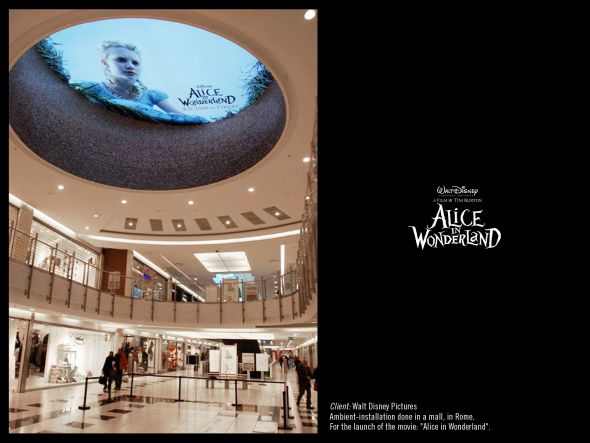 Ambient-installation done in a Mall, in Rome. For the launch of the movie: “Alice in Wonderland”.

Have an ‘Adventure Har Roz’ with Prince Chocolate Biscuits 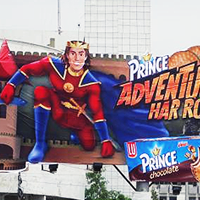 The OOH campaign launched by Prince Chocolate Biscuit sparks excitement. Located at Shahrah-e-Faisal, the billboards captures the eyes of parents and children.

Win an S4 without a win 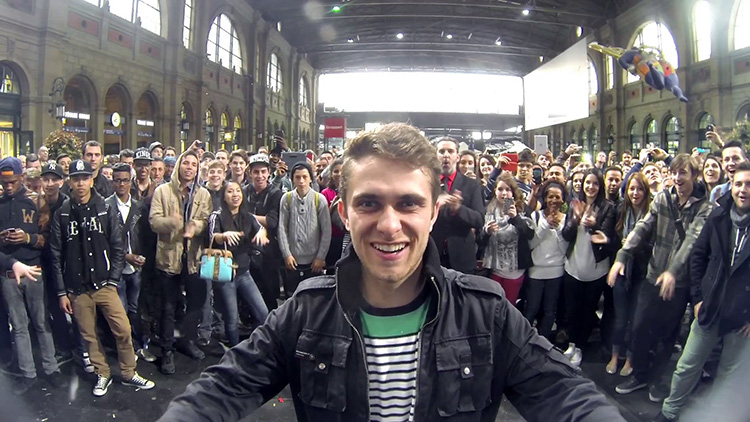 Samsung promotes their new campaign with their famous ‘Stare Down’ challenge. The campaign took place in Zurich where people were to stare at the new S4 phone while standing on a podium for 60 minutes. The challenge: not to wink. The campaign was successful as one person did manage to win through this campaign

Get your very own miniature with Coca Cola Mini Me 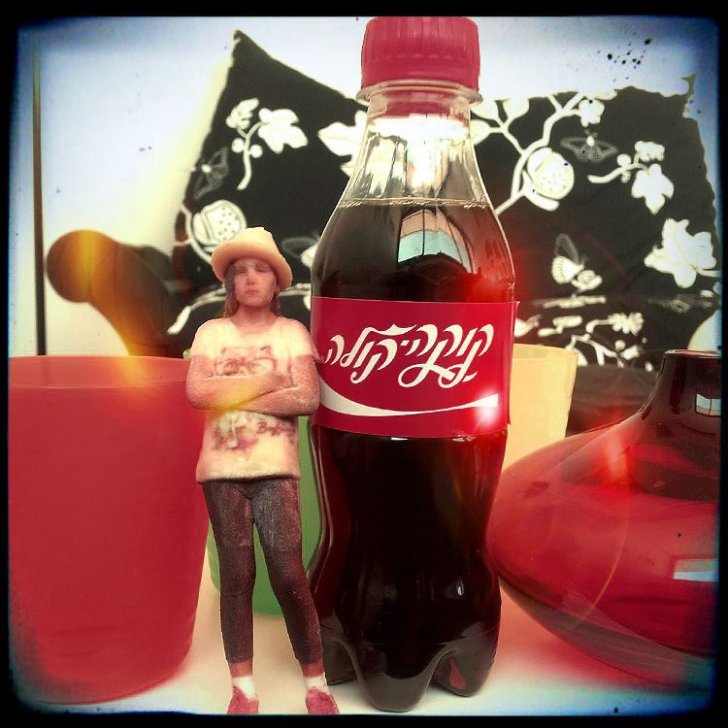 Philips needs you to hear tables 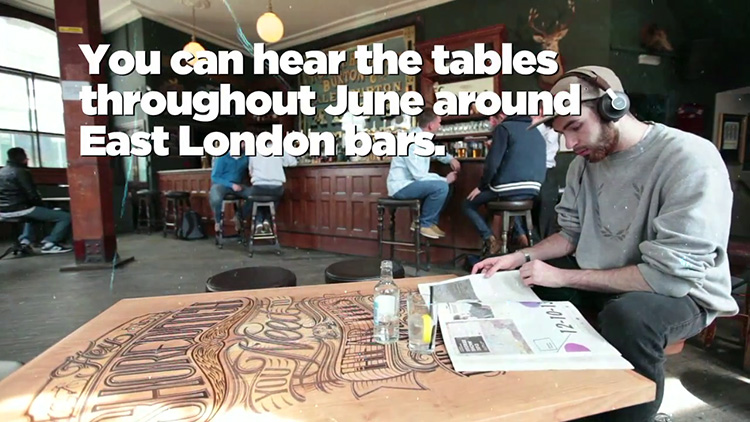 The recent outdoor campaign shows how Philips has created tables, installed with music that you don’t want to miss. The campaign revolves around listening music with Philips headphones by plugging into tables. These tables have exquisite topograph done onto them, playing music central to a defined community, targeting bars and coffee shops, bringing back old school 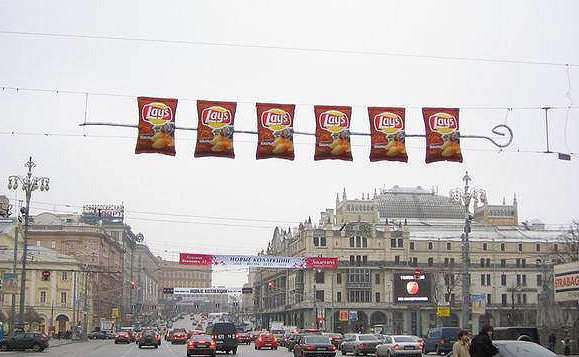 Lays brings a new barbeque flavour for you to enjoy a quality, flavour-packed bag of chips. The OOH campaign shows bags of the new Lays Barbeque flavoured chips on a skewer, hanged with the support of wire cables

Return to your music roots with LG Karaoke 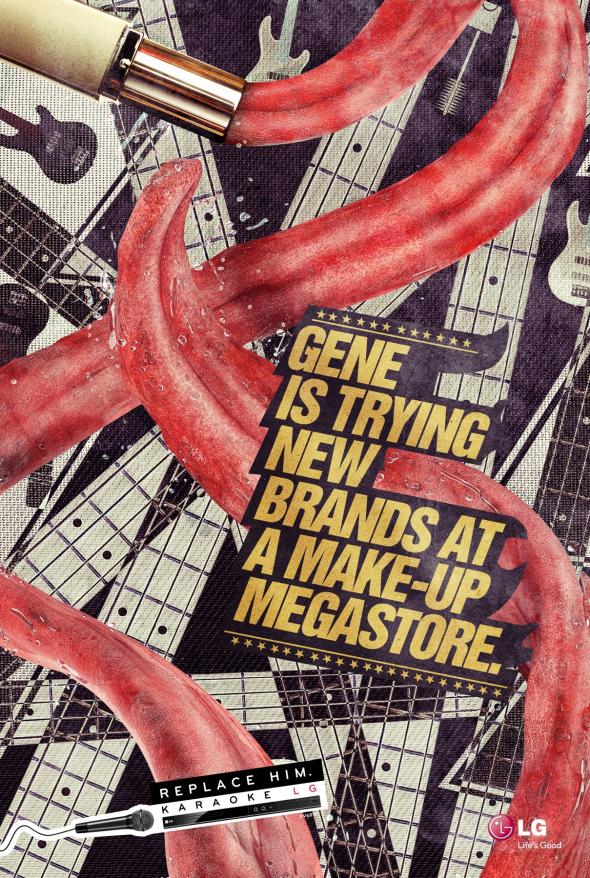 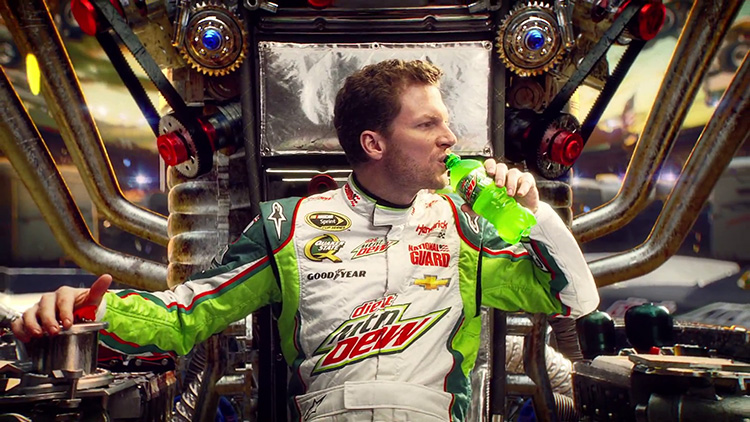 Witness the legend coming alive in this 30-second video, where NASCAR superstar Dale Earnhardt Jr. is captured in a live portrait and narrating exactly everything that makes him a legend for all time 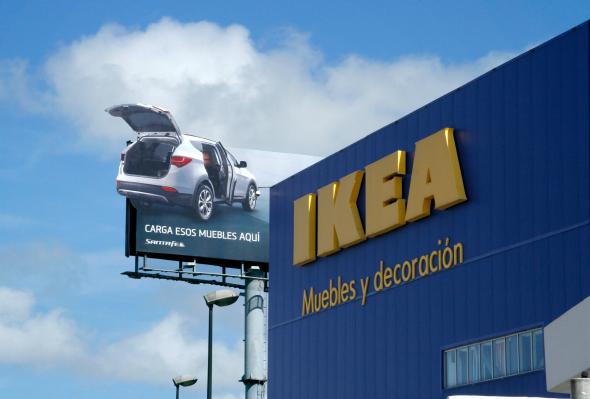 The new Hyundai iLoad series shows robustness that can load heavy cargo under tough conditions. With ample space, cargo can travel without the risk of wreckage in the Hyundai iLoad

Enjoy the new Cheese and Ketchup flavoured chips by Slanty

Slanty brings to you exciting new flavours available in Cheese and Ketchup. Also, get a chance to enter competition and win prizes with Slanty 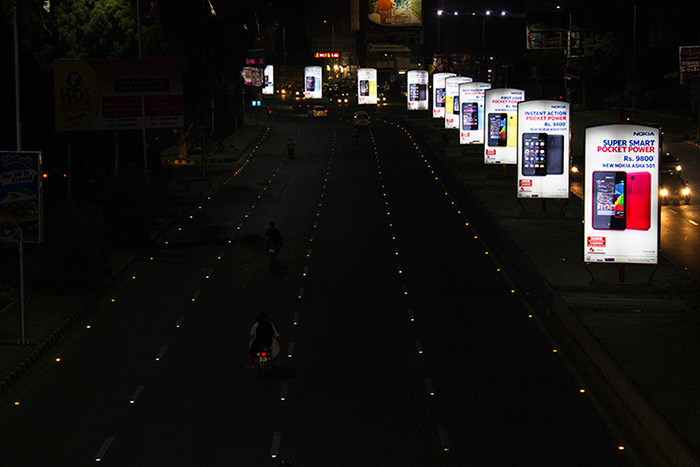 Keep updated and maintain your budget with the budget-savvy new Nokia Asha 501 Smartphone.

The Tallest Freestanding Cuckoo Clock in US – Portland is Happening Now! 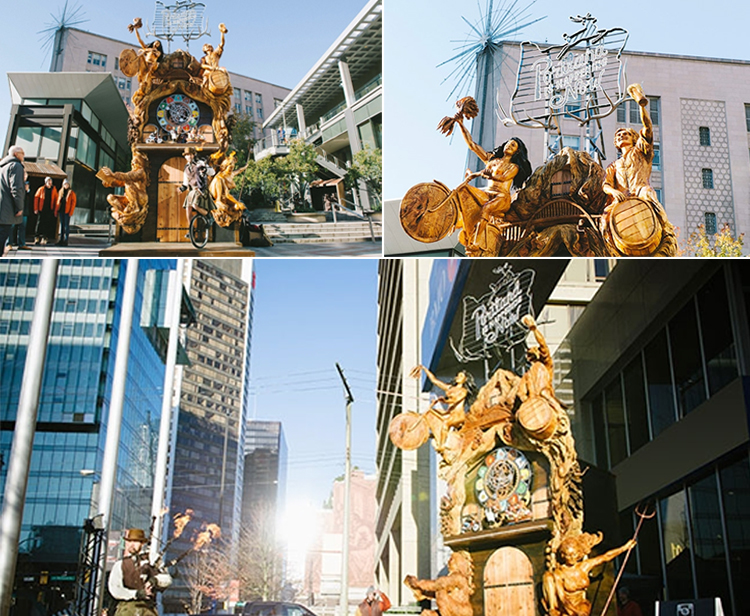 Wieden and Kennedy present a quiet unbelievable out of home campaign which is a tourism installation for travel Portland in the form of the tallest freestanding cuckoo clock in United States. The clock used in the outdoor is made by chainsaw Sculptor J. Chester Armstrong which is made from a single Oregon maple just outside Portland in the national forest. The mesmerizing part is that every hour on the clock, hand painted, wood carved miniatures appear every time the clock chimes. It also features ‘Portland Themes Surprises’ like coffee and donuts, a poet reading, a comedian performing, a tax free tea party and naked bike riders. Moreover, the clock is 24.1 feet tall by 9.5 feet wide and it weighs more than three tons. The project is named as ‘”Portland Is Happening Now”. The agency behind this giant project is Wieden + Kennedy, Portland, Ore. Their event partners include; Social Agency: Edelman Digital, Public Relations Agency: Lane PR, Digital Agency: Rally Group and Event Producer: Sue Cool. 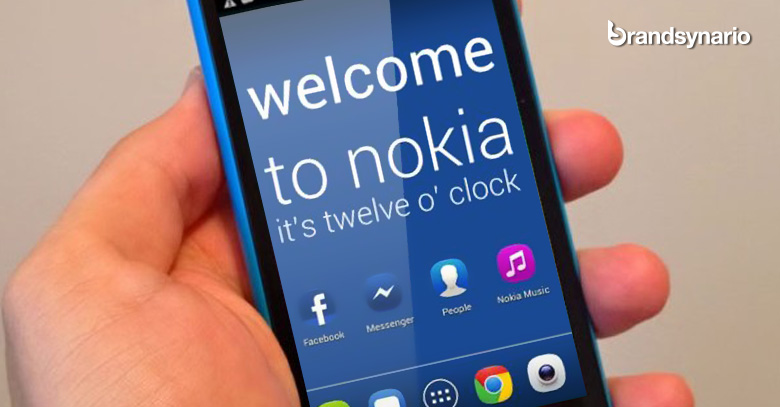 What we know about Nokia Normandy

Nokia Normandy has made fresh rounds on the social media, the big mystery cloud that has been hovering over the much talked about project from the Finnish manufacturer faded away with the latest pieces of the puzzle, screenshots revealing the potential user interface of the phone made a debut on twitter and became the hottest topic on the internet.

The screenshots features the notification area and a home screen of the Normandy. The left screenshot is the home screen, which resembles the Windows Phone 8 live tiles. The shot of the home screen complete with tiles might throw you off in the first glance as it seems like Normandy is a windows phone but the BBM app icon present on the screen assures you that it will run on android.

The android version used in Normandy is a forked version which is what Amazon does with its Kindle Fire, something thats not aligned Google’s own version. The User Interface of Normandy offers a mix of Android and Windows phone one might say that it is an interesting combination by Nokia that is sure to be a hit among the user.

The leaked pictures also show some applications on the home screen which are not available for Windows Phone along with a notification center. It is rumored that the handset will come with the usual Nokia and Microsoft applications that ship with its Windows Phone lineup like Nokia Camera app, Here Map etc. Many believe that  Nokia has done a worthy job with the customization, if the leaked screenshots are legitimate, offering users the facility of Google’s OS with the simplicity of Windows Phone.

The technical specifications are still unknown at the moment, but rumors hint that, the handset should come with a 4GB storage with microSD card 512MB of RAM, a Snapdragon processor, and a 4-inch display.The handset will be equipped with a single button, just like the one found inside the Asha handsets. Apart from these there isn’t much news about the specifications that the phone will bring to the table.

We will need to wait and see how Nokia will proceed with this project but for now many hope that Normandy become a real deal as an Android phone by Nokia has been long over-due. 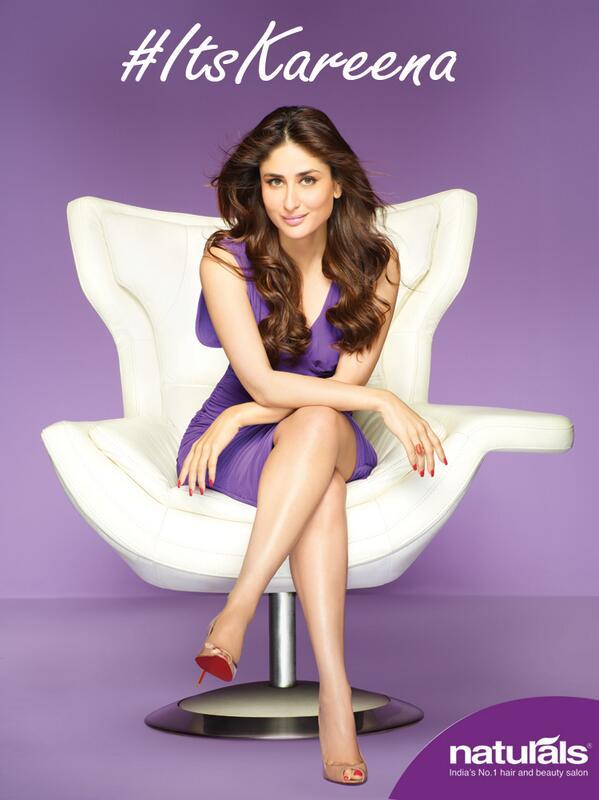 Kareena Kapoor has recently been signed on as the brand ambassador of ‘Naturals’ a leading chain Hair and Beauty Salon Chain in India. The salon, which has a strong hold in south, is keen to expand in places like Delhi, Punjab, Maharashtra and Gujarat. 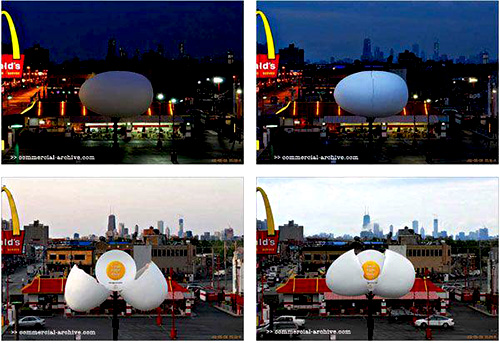 McDonald’s advertises its daily breakfast via the creative idea of a gigantic egg that starts cracking at dawn, and gets fully opened at breakfast time, bearing the message “Fresh Eggs Daily.” 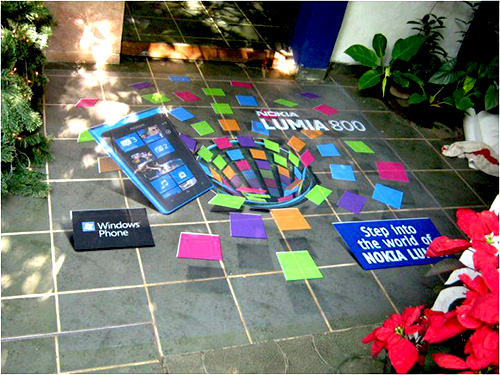 Nokia comes up with the perfect idea of street branding by designing large 3D street, chalk painting to promote the new Lumia 800 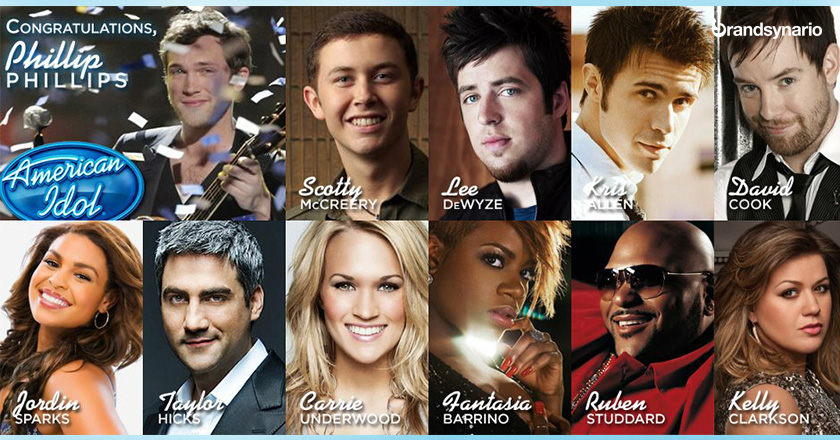 Forbes recently released its list of top ten highly paid American Idol alumni and to no ones surprise; it is the winner of Idol’s 2005 season “Carrie Underwood” who is the star of the list.

Basking in a whopping amount of $31 million, Underwood has six Grammys to her name. The most paid American Idol winner has launched four albums till date, including her platinum-selling “Blown Away”.

Extensive tours all over the world and her brand endorsement for “Olay” have also contributed to Carrie’s massive fortune. In just five years, she has earned a colossal sum of $ 83 million.

After Carrie Underwood, the next grossing Idol graduate is none other than the very first winner of America’s most popular talent show “Kelly Clarkson”, with a $7 million paycheck.

With the first two spots grabbed by Idol queens, the third most rewarded alum is “Phillip Phillips”- the winner of 2012 season, in tie with “Adam Lambert”- runner up of season of 2000.

After him, Chris Daughtry makes his appearance on Forbes list on the 5th rank, with $4 million.

All in all, the Idol’s Alumni Girls are more in power as they dominate a major part of Forbes’s list.

Have a look at the complete list of top ten 2013 earnings of “American Idol” alumni. 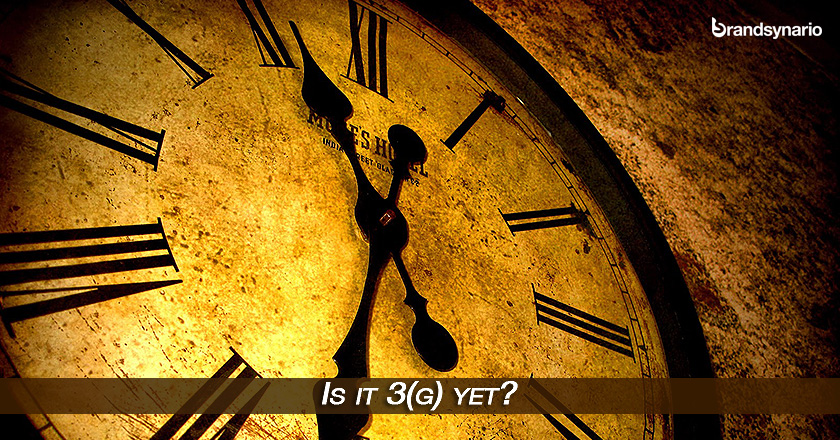 the news about arrival of 3G in Pakistan has been in the air for quite some time now. All internet users, especially the students, await the launch of this global technology that would make connectivity more seamless and quick.

However, the recent researches have reflected that 3G will not only benefit the internet users, but contribute largely to the progression of Pakistani economy.

It has been clearly established through studies by an array of economists, that there is a strong positive relationship between broadband penetration and GDP growth.

Plum Consulting, one of the leading research companies has recently revealed that Pakistan is set to achieve at least 10 percent broadband by 2018 if 3G is successfully auctioned in 2014

If we look closely, we observe that the that impact of a ten percentage point increase in broadband penetration on GDP growth rates range from 0.1-1.5 percentage points, with higher impacts found in developing countries  like Pakistan.

This translates into the fact that if 3G arrives in Pakistan, Pakistan’s current GDP will rise by a whopping Rs. 40 billion in just one year. The forecast further reveals that there will be subsequent increments of  R.s. 105 billion and Rs. 210 billion in the proceeding two years respectively.

OTHER BENEFITS OF 3G

The reports by Plum Consulting further reveals the following benefits if 3G hits the market of Pakistan.

1. Increase in jobs by approximately 90,000 opportunities, due to creation of jobs in the sector.

2. Generation of auction money through 3G

3. Addition of taxes of at least Rs. 29 billion and at most Rs. 71 billion from various sectors.

4. Assistance to the IT sector through Cloud based sources

5. Promotion of businesses at all levels.

6. Increase in export revenues due to global networking

8. Stimulation to the smartphone market, with local players benefitting from the technology

9. Reporting of social complaints at the top levels

10. Help to the governmental services

Unfortunately, all of the above advantages can only be achieved if the government supports the booming telecom sector, which does not seem to be much in place. In order to harvest the fruit of this magnificent technology, a serious effort towards planning and control is needed, so that every individual of the country can make the most out of this service