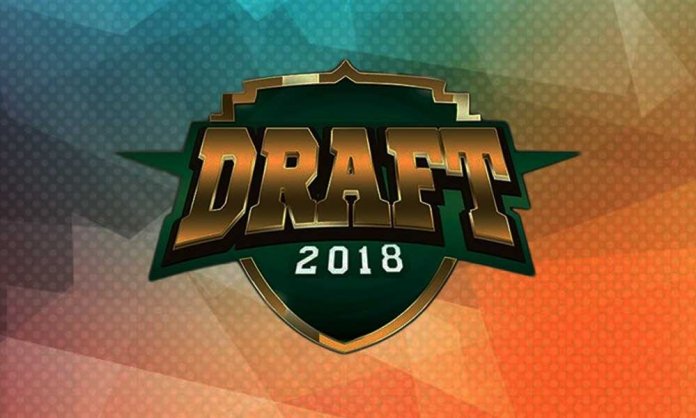 A massive number of 663 foreign and local players are a part of the Diamond, Gold, Silver and Emerging rosters for teams to pick their players. 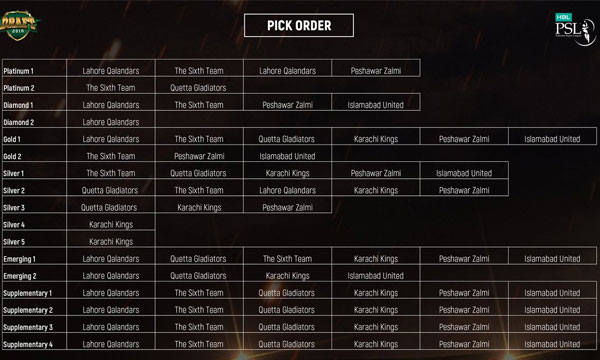 Supplement (US $175,000): This category doesn’t have a maximum and minimum payroll. It’s an additional round, allowing teams to pick extra players as a backup. They can pick a maximum of four players from the purse of $175,000.

Catch the #PSLDraft2018 LIVE on https://t.co/mogJlDSXV1 ( Available in UK, US, AUS/NZ, South Africa)

Ho Jao Taiyaar Kion Ke It’s PSL time!
Catch all the happenings of #PSLDraft2018 from Islamabad live on YouTube on 20th November at 1:30pm (PKT)
Log on to https://t.co/MPED0ZM628 pic.twitter.com/8GQ9ZRWXHZ

Update: All six Pakistan Super League (PSL) franchises have finalized the retentions for the upcoming edition of the league which is to take place in February 2019.

BREAKING: The PSL Team Retention list for Season Four is revealed. #PSLDraft2018
How many of your favourite stars made the list? pic.twitter.com/onmW8wWuSu

The defending champions have the following players retained:

UPDATE:
Shaheen Shah Afridi appointed LQ Ambassador, drops down to Silver. LQ now go to the Draft with four Silver players.
Since LQ have already traded their second round Silver pick with Quetta Gladiators, LQ have given up their first round Silver pick as a result of this move.

Since Multan Sultans is no longer participating in PSL 4, a new team will replace them.

The following are the major developments which have been made for PSL 4 2019:

Pakistan Cricket Board has terminated the contract with Schon Properties for Multan Sultans as the franchise failed to meet its financial obligations.

Following the termination of the contract, all rights in respect of the team have now been reverted back to the PCB.

The Board shall take complete responsibility of all player and coach contracts. The team selection for the sixth team at the player draft scheduled to be held on 20th November 2018 will be done by PCB itself. The rights holder would have the option of choosing the sixth franchise city and name. -PCB Spokesman

Update: In the latest Pakistan Super League Season 4 new updates, we have found out that this time around 682 cricketers will be available in PSL draft.

These players are from all around the world, except India. AB De Villiers will be available for 2 weeks when Steve Smith only matches in the UAE, sources added. 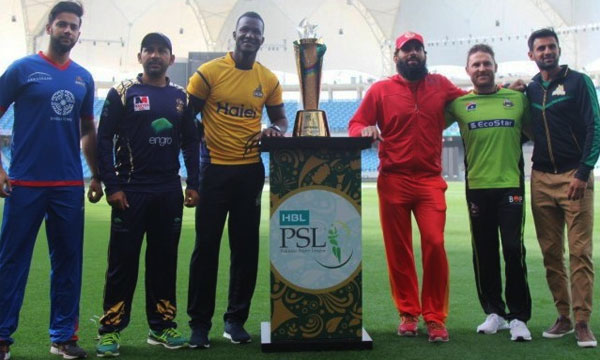 Breaking down the 682 cricketers, 371 are foreign while 311 are local players. They come from some of the top performing cricket countries including South Africa, Australia, West Indies, Afghanistan, Sri Lanka, Zimbabwe, England, New Zealand, Bangladesh, and Ireland.

682 cricketers available for PSL Draft,371 foreign and 311 locals,Salman butt,asif,Abdul Razzaq and Imran nazeer names are also included in the list,smith is just available for UAE matches,devilliers only available for 2 weeks #PSL4 pic.twitter.com/m4pYa2kJRg

Here’s what we know so far:

Availability of Overseas Players in #PSL4:

AB DeVilliers will be available for first two weeks, S.Smith will only play in UAE, Munro will join after first week. B.McCullum, Gayle & Rashid Khan will join after playing BigBash Final on 17Feb. Ronchi to play all matches.🏏 #cricket

You can find all the latest PSL Squads from the 2018 edition here.

PSL Squads Before the Draft

Multan Sultans: To be decided.

Islamabad United: To be decided.

Karachi Kings: To be decided.

Peshawar Zalmi: To be decided.

Rounds in the PSL Draft

Yet to be decided.

HBL PSL 4 Draft 2019 is just around the corner, the 4th edition of the league will start in a couple of months, the squads are yet to be named.

More information about players and their respective categories will surface as we get closer to the tournament dates.

Here’s everything we have gathered about PSL 2019 so far.

PSL 4 will start on 14th February – 17th March 2019, as per Pakistan Cricket Board, a total of 8 matches will be played in Pakistan. Like the last season, the final match will be held in the ‘City of Lights’ Karachi.

However, the number of matches and venue for the final match can be changed due to security measures the board and authorities involved might take for the safety of all players.

The following are the PSL 4 franchises:

The 2019 PSL 4 Player’s draft has been scheduled to take place in November with an expectedly higher turnout of foreign players this time around. Cricket giants including AB de Villers and Steve Smith are going to be a part of the tournament.

The following is the division of the players and their respective categories:

REVEALED! The PSL 2019 Foreign Platinum Players list. An exciting roster with some of the biggest stars of the T20 format. #PSLPlatinum pic.twitter.com/j9S5iURS6V

📣 Updated categories for players who took part in #PSL2018 are now out. Where’s your favorite star placed now?

As per the latest news, Pakistani player Ahmed Shehzad has been placed in the Gold Category. Previously, Shehzad was found positive for doping and was suspended from the game. Umar Akal was also in trouble for misconduct and was removed from Platinum, and has reportedly been placed in Gold.

“Shehzad’s name has now been added to the PSL pool of players. He is placed in the Gold category. Ahmed played for Multan Sultans last year and is currently placed on their roster. Multan can retain, trade or release him back into the Draft pool,” said the board’s release on Thursday.

Overseas players who feature in matches in Pakistan will be paid $10,000 per game they appear.

Note: This is a developing post, it will be updated as more information is shared.