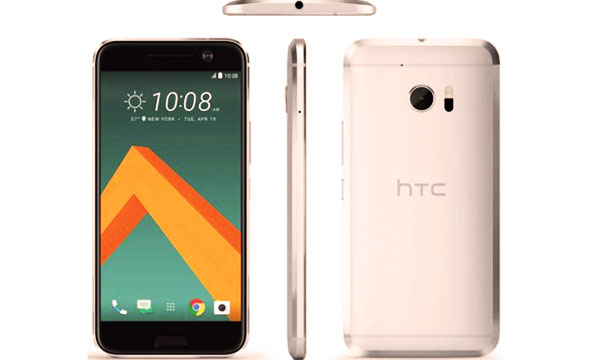 Absent from this year’s Mobile World Congress in Barcelona, Spain, HTC’s latest flagship handset has leaked online ahead of its official presentation, via the Twitter accounts of bloggers Steve Hemmerstoffer (@OnLeaks) and Evan Blass (@evleaks). The generally very well informed pair posted pictures of the upcoming smartphone along with technical specifications.

First of all, it looks like the Taiwanese tech firm will be revamping the name of its flagship handset. Dating back to the One M7 then followed up with the One M8 and One M9, the new model looks set to get a shorter, simpler title — the HTC 10.

The leaks suggest that this new flagship smartphone will get a 5.15-inch QHD display (2560 X 1440 pixels), a Snapdragon 820 processor and 4GB of RAM. It’s said to come with a 12-Megapixel camera, a USB-C connection, plus a digital fingerprint reader.

Whatever its name, this handset will be replacing the One M9, presented at the 2015 Mobile World Congress. The M9 is still on sale, promising a sleek design with a stylish aluminum unibody casing finished in steel gray, silver or gold.

With 4G+ connectivity (up to 450Mbps, according to the manufacturer), it comes loaded with the Android OS with HTC’s customizable Sense 7 interface. This can now adapt to the user’s needs wherever they go thanks to a contextually aware selection of widgets.

The leaks suggest that the HTC 10 could be officially unveiled in April 2016, before going on sale in May.

Check out the official teaser video for the HTC 10: