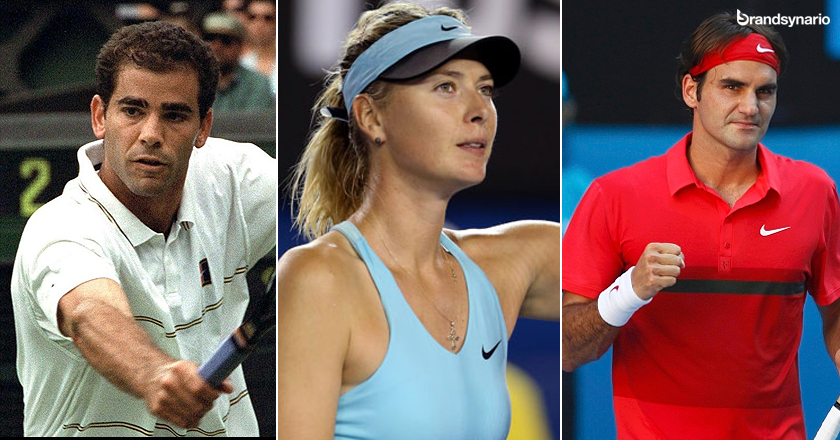 Tennis is the second most-watched sport, only behind Football (soccer), and it hardly comes as a surprise that it is one of the most lucrative sports worldwide. With officials at the first grand slam of the year, Australian Open, announcing record prize money in excess of $40million, the complete picture of the obscene amounts of money involved in the sport becomes somewhat clear.

Here Brandsynario looks at the top 10 Tennis players (as of 2014), past and present, according to their net worth.

Former Russian tennis star, Anna Kournikova, retired from the game in 2007, enjoying a career that spanned almost 15 years. Although Kournikova never one a single singles Grand Slam, she won doubles’ Grand Slams with Martina Hingis, with the two being labelled the ‘Spice Girls’ of Tennis. She is engaged to pop singer Enrique Iglesias, and is worth an estimated $50 million.

The great Scot, and Britain’s number one player, Andy Murray the 27-year old is has endorsed sporting giants, Adidas, and recently signed a sponsorship deal with RADO. With career winnings of more than $40 million, and two Grand Slam titles to his name, Murray has an approximate net worth of around $70 million.

Venus Williams, sister of World No. 1 Serena Williams, is a former World No. 1, known for her agility and strength as a tennis player. With 21 Grand Slam titles to her name, Venus Williams has her own range of clothing line, Eleven, and has endorsed brands such as Nike, Electronic Arts, Wilson, and Ralph Lauren. She is now worth almost $75 Million.

Current World No. 2, Russian beauty, Maria Sharapova, is one of the most coveted tennis stars today. With five Grand Slam titles to her name, Sharapova has earned more than $32 million in prize money during a career spanning almost 12 years, while her total net worth, including all her endorsements and sponsorships with brands such as Nike, Prince, and Canon, amount to about $90 million.

Current World No. 1, Serbian tennis star Novak Djokovic has career winnings of more than $72 million, and is only behind Swiss maestro Roger Federer in the all-time career winnings list. With seven Grand Slam titles to his name, Djokovic is worth in excess of $90 million.

Spanish sensation and one of the youngest French Open champions, Rafael ‘Rafa’ Nadal is widely regarded as the greatest clay court player in history. With 14 Grand Slam titles to his name and career winnings in excess of $70 million, Nadal’s net worth exceeds a whopping $100 million.

The richest female tennis player in history, Serena Williams is a powerhouse of an athlete, and undoubtedly one of the greatest tennis players in history. With 18 Grand Slam titles to her name, and endorsements with brands such as Nike and Wilson, Serena Williams has career winnings of more than $63 million, and a net worth of more than $120 Million.

Former World No. 1, retired tennis star Pete Sampras is one of the greatest players to have graced the sport. With 14 Grand Slam titles during a trophy-laden 14 year career, Sampras earned more than $43 million in prize money, while his net worth exceeds the $150 million mark.

Like Pete Sampras, Andre Agassi is a retired former World No. 1. Agassi won 8 Grand Slam titles during his playing career, while earning more than $31 million in prize money alone. Married to one of the greatest female tennis players in history, Steffi Graf, Agassi’s net worth is more than $175 million.

Arguably the greatest tennis player in history, Roger Federer recently won his 1000th game as a senior professional. He has won a record 17 Grand Slam titles, and is one of the highest earning athletes in world sport today, with his career earnings amounting to almost $90 million. The face of Nike, Mercedes-Benz, and Rolex amongst many others, Federer is worth more than $300 million, and is the richest tennis player in history!