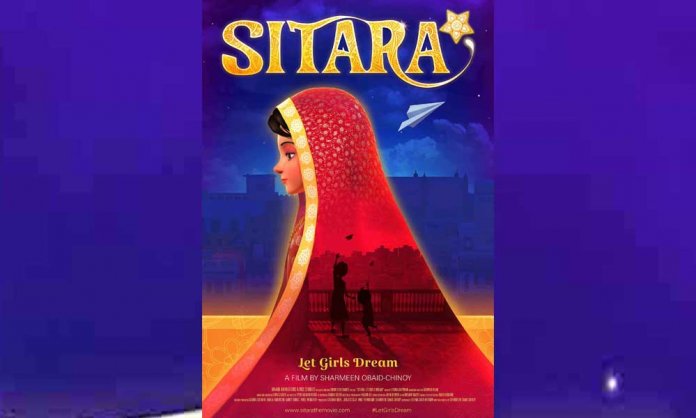 Indeed it is the only animation film from Pakistan to have won three awards at LAAF 2019.

“We at Waadi Animations are delighted to be able to represent Pakistan on a global stage and honored that our film SITARA: LET GIRLS DREAM is being recognized – our artists and animators have worked very hard to create this special film and we are excited to share it with the world,” said Sharmeen Obaid-Chinoy.

Written and directed Sharmeen Obaid-Chinoy, SITARA: LET GIRLS DREAM takes the audience on a journey through the old city of Lahore, where a fourteen-year-old girl named Pari, dreams of becoming a pilot. Her story is told from the perspective of her younger sister, Mehr, and portrays the impact of culture and the burdens of a family where girls still struggle to fully realize their dreams. SITARA is a silent film [no dialogues] that embodies this conflict.

SITARA: LET GIRLS DREAM is also the first Pakistani Animated Film to be released and distributed by NETFLIX USA. The film is scheduled for release on 8th March 2020 and will be available to stream in over 190 countries.

Chinoy had earlier launched a campaign with GUCCI’s social impact initiative Chime for Change to #LetGirlsDream by encouraging girls around the world to share their dreams and gain inspiration from one another. A robust school outreach program is already underway across the world, to inspire and encourage girls to hold meaningful conversations about their dreams and how to best achieve them. The website for the campaign is www.LetGirlsDream.org

Founded in 2007, the Los Angeles Animation Festival is LA’s only international film festival and symposium which has featured and honored notable animation personalities such as include Brad Bird, Sean Lennon (also Artistic Director), Bill Plympton, ‎Peter Chung, Chris Prynoski, Tom Kenny and Will Vinton – to name a few.

The trailer for SITARA: LET GIRLS DREAM can be viewed here: https://youtu.be/EztDSGZb2xY

Behind The Scenes for SITARA on Netflix can be viewed here: www.youtube.com/watch?v=-g5jxEGQKpo