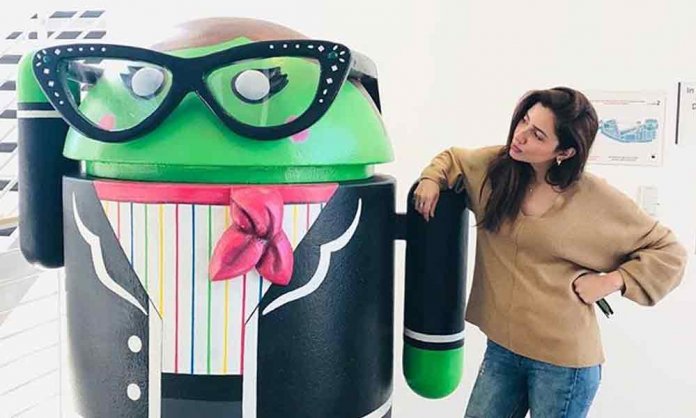 Winning hearts all over the places, Mahira Khan is on a roll to raise funds for Shaukat Khanum Memorial Cancer Hospital.

The starlet has now taken over Google after visiting Facebook headquarters in the United States.

The superstar took to Instagram, sharing some of the priceless moments from her visit to Google Headquarters in California.

Talking about her experience at Google HQ, Mahira wrote that she had a great time over there and thanked Google for their support on behalf of SKMCH.

I am not a tech geek but man I was geeking out at @google HQ!
Can’t wait to go back, had a greeaaaat time.
We at @shaukatkhanum are grateful for the support.
P.S Its true’ Google does know everything💁🏻‍♀️

That’s one proud moment for our diva!

Mahira Khan has actively taken part to raise awareness about cancer in Pakistan and is raising funds for country’s biggest cancer hospital SKMCH. The diva is traveling around the U.S. from the past few days for the same purpose.

First, she was in Los Angeles to auction a bat signed by our PM Imran Khan, also the founder of SKMCH.

Ain’t no ordinary bat🏏Auctioning a bat signed by Mr PM himself @imrankhan.pti tonight in LA for the @shaukatkhanum fundraiser! See you all tonight x P.S don’t judge the form✋🏼

Just a day ago, Mahira was spotted at the headquarters of Facebook, where she attended a gala dinner and appealed to raise funds for Shaukat Khanum Memorial Cancer Hospital.

Thank you @facebook for having us. On behalf of @shaukatkhanum we visited the campus and had a great talk there. Through Facebook we have been raising awareness for years now and hopefully will continue to do so💙

On her journey to promote social awareness about Cancer in Pakistan, Mahira has taken one step ahead as she visited the headquarters of one of the world’s biggest Tech company and we are super proud of her.

Google Bids Farewell to Yet Another Executive Amid Harassment Claims

Mahira Khan is always willing to take part in such activities and her presence surely attract the required attention. Earlier in September, she visited the Afghan refugee camp by UNHCR. She spent some quality times with the kids over there and won hearts by her down to earth persona.

These two boys followed me around the whole time. They hadn’t watched any of my films but they insisted they knew someone called Raja. They said ‘Raja hero hai!’. We kept trying to guess who they are talking about. Finally they sang a song from @varundvn ‘s film. They also said they want to be like him. Told them one day inshAllah they will be ❤️ #unhcrpakistan #unhcr @unhcrpakistan

As if we are already not impressed by her personality enough, Mahira Khan keeps giving us reasons to adore her even more.