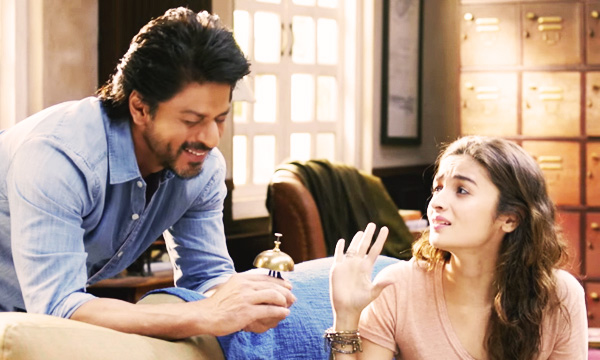 Dear Zindagi has hit the cinemas all over and is already touching the right chords! Featuring the Bollywood charmer SRK, and the bubbly Alia Bhatt, the movie is a wonderful take on realities and ups & downs of life. Fans cannot stop gushing over how Alia and SRK have won hearts with their overpowering performances and made the watch so relatable & worthwhile.

The odd pairing of SRK & Alia has doubled the excitement and has actually been working wonders for the flick!  Directed by Gauri Shinde, the film has reaped in amazing reviews from the audiences and critics alike!

#DearZindagi has taken very good start at multiplexes all over.. Heading toward a good first day total.. @iamsrk presence a good boost!

#AliaBhatt is an evolving gem with each film and she excels in #DearZindagi but the story and execution faltershttps://t.co/0c7yZ7XXxe

#DearZindagi is a very touching special film with crucial life lessons that u should not miss ,thank u @gauris for this experience

It's interval n what a brilliant film #DearZindagi! My salute to Gauri Shinde for making such a superb film. Alia is superb n at her best.

#DearZindagi I love you! I need a therapist like @iamsrk and I'm so happy @aliaa08 exists… thank you @gauris ❤️😘😘😘

What an amazing experience I had last night watching #DearZindagi. I’m still thinking about it,it’s all heart and so pure. @gauris thank u:)

No matter what the critics say, Twitterati looked more than satisfied with the SRK & Alia starrer and sang praises

#DearZindagi is different, amazing and so realistic. @gauris does it even better a second time around after #EnglishVinglish. A solid 9/10.

4.74/5 from me!! Go watch the film guys…. I promise you will watch again! A beautiful film to watch out this weekend "DEAR ZINDAGI DAY"

Powerful content 💪🏻 and I believe the audience will accept it by heart & take d movie to the next level. HIT DEAR ZINDAGI DAY#thanksgiving pic.twitter.com/42bxxcCfsx

Cult classic..Privileged to watch @iamsrk in wht can be said as one of his most mesmerizing performances.Take a bow King 😎 Dear zindagi day pic.twitter.com/pOQIoBrvqh

Fans are desperately craving for a life coach and mentor like SRK!

Don't go to watch this movie to have some fun.. Its a movie to go and get deeper meaning of life <3 Class written all over it! #DearZindagi

#DearZindagi this fresh morning in a fine sunny day kind movie not failed to impress and inspire.@aliaa08 came long way as an actor.

#DearZindagi – what's there in store – want to feel the life of both & let's break up pic.twitter.com/7Av28XAmRW

According to the reports, the film has got over 50% occupancy in shows earlier today. Based around the character of Alia Bhatt, who did a pretty good job with her role and SRK’s extended cameo appearance, the flick definitely seems to be a must-watch!