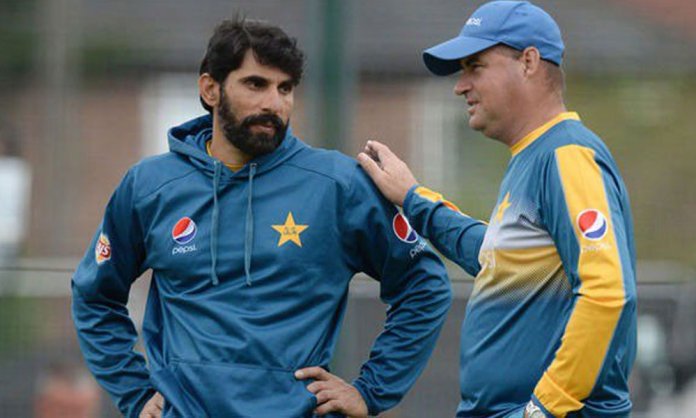 Former captain Misbah-ul-Haq has now been confirmed as Pakistan men’s national team head coach in all three formats on a 3-year contract.

Misbah has also been named as the Chairman of Selectors with head coaches of the six first-class Cricket Association sides as his fellow selectors.

PCB also named two-time former head coach and ICC Cricket Hall of Famer Waqar Younis as bowling coach of the national side on a three-year contract on the recommendation of Misbah.

It is very humbling for me to join a select group of some of the very best to have coached the Pakistan national sides in the past. It is an honour and more than that, a massive responsibility as we live and breathe cricket.

I know expectations are high, but I am absolutely ready and up for the task otherwise I would not have thrown my name in the hat for one of the most challenging and coveted roles in Pakistan cricket.

We have some of the most talented and exciting cricketers, and I will like to help them train and prepare in such a way that they can play intelligently, smartly and fearlessly.

I am aware this will require a change in the dressing room culture but if we have to compete consistently at the highest level, we have to embrace these modern-day requirements.

We need to understand this is a performance-oriented world and only those Pakistan players have thrived in the past who have taken the pride in donning the star and crest on their chests by delivering every time they have stepped on to the field.

That’s the way I have played my cricket all through my career and this will not change in my new role.

I am excited to once again have someone as experienced and knowledgeable as Waqar Younis in my corner as a bowling coach. We have exciting young fast bowlers in our ranks and there is no better person than Waqar to transform them into modern day stars.

Both Waqar and I had a candid and frank discussion and we discussed and agreed on a number of things, including roles and responsibilities as well as how to take things forward.

As I prepare to begin a new phase in my career, I want to thank my family, friends, former team-mates, the PCB and my club, departmental and franchise sides for supporting me in my journey. –Misbah-ul-Haq

The PCB have appointed former Pakistan captain Misbah-ul-Haq as Head Coach (all three formats on a 3-year contract) and Chief Selector for Pakistan; On Misbah's recommendation, Waqar Younis has been named as bowling coach of the national side (3-year contract) #Cricket

Waqar younis as head coach ruined our team and now he's going to ruin our bowling line. Promotes grouping and make players fight amongst each other

Misbah just like malik was an average cricketer. he wouldn't have survived if they had played in another country they were just lucky to play for pcb. PCB made alot of blunders but making misbah coach would be bigger than all. #MisbahulHaq

Waqar Younis is the who ruined Pakistan cricket in last years as head coach
His performance was pathetic as whole, he Ruined Abdul Razaq like legend's career, now he is here to ruin your bowling
Rest in peace Pakistan bowling..
@RIPPakistancricket

What do you think about this decision?