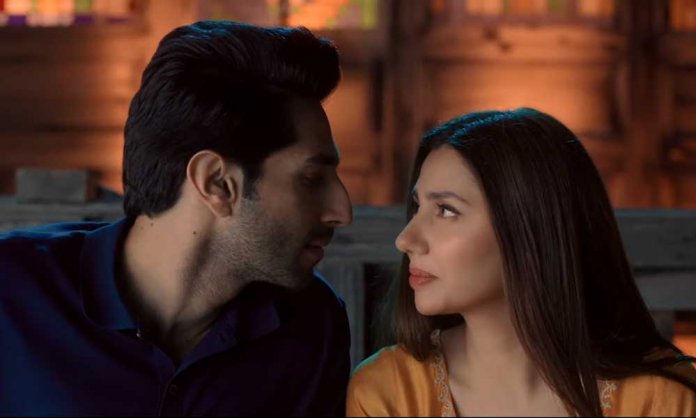 Mahira Khan and Bilal Ashraf’s chemistry in their upcoming film Superstar has been loved by almost everyone who saw them swaying and romancing in the first song ‘Bekaraan‘. The two look amazing together and the trailer released is just as visually stunning.

In case you needed further convincing regarding this onscreen pairing, the second song, In Dinon by Atif Aslam is proof that they’re guaranteed to create magic.

In Dinon is a romantic song by the current king of romantic tracks, Atif Aslam whose breathtaking vocals capture the feeling that love is in the air.

Featuring rain, romance and magic, Bilal as Sameer Khan and Mahira as Noor are seen falling in love in every frame. Their eyes project the emotions so flawlessly that one can’t help but be mesmerized.

Judging from the trailer, the song speaks of the simple love that the two share before life gets complicated and the two lovers face struggle and heartbreak.

Sameer is a famous actor whose stardom seems to be threatened while Noor is a small town struggling newcomer who eventually becomes a superstar.

Destined to be labeled the love anthem of the year, the song has already become a favorite.

“You were magic then.. you are magic now,” Mahira Khan praised Atif and we’re pretty sure the whole world agrees.

Here’s what Twitter has to say about the song:

#InDinon What a song 😍
I just love love song ❤
After all @TheMahiraKhan ur 1st heroo sing a song @itsaadee 😜
Or uper sy bilal and Mahira chemistry ahhhh lovely…😍#Superstar 🌟 pic.twitter.com/wmVZQw2CD7

The song is also trending in India too because obviously, they miss Atif!