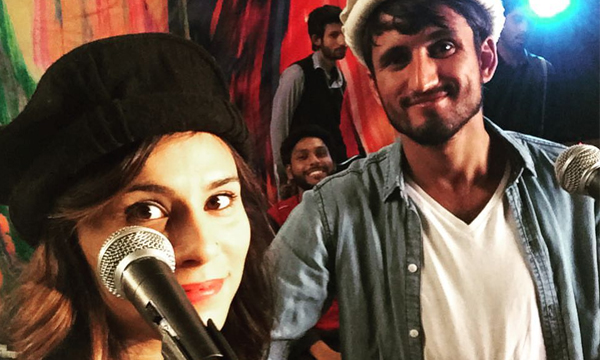 The talented singer Zoe Viccaji has teamed up with Chitrali singer Irfan Taj for a romantic number called Ashiqi Angar.

The song music has been directed by Junaid Mustafa whereas it has been produced and recorded by Mubashir Admani. The singer while talking about the song said it would be a duet number with a beautiful fusion of Urdu and Chitrali lyrics.

“The song is a romantic track about two different philosophies of loves,” Viccaji said.

It has been shot near Mubarak Village, close to Balochistan border.  While shooting the song the team got stuck in a remote area and was later rescued after more than three hours.

Viccaji shared the picture of the tired but happy team on her Facebook via Instagram. Take a look:

Viccaji has plans to release the song in February considering post-production to be done on time.

“We really want to let it out in February, but it all depends on the edit. Chances are high that we will release it in the first quarter of this year,” she said.

Irfan Taj is an aspiring folk singer from the far-flung region of Chitral.

With a passion to highlight the music of his region Irfan Taj has collaborated with Viccaji. The singer on his official Facebook page has shown a desire to promote local music.

“I am in search of many ways to represent our great culture and show it to the world. There is a lot to explore in Chitrali music – we have the flavor of country music with added essence of Persian music in the soul of many local compositions,” he wrote on Facebook.