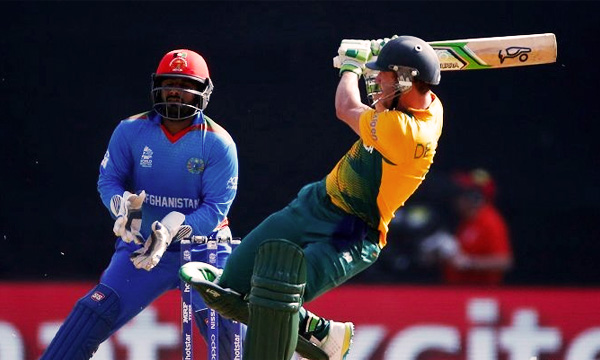 Andre Fletcher and AB de Villiers displayed masterclasses in batting at the World Twenty20 Sunday as the West Indies made it two wins from two and South Africa got their first points on the board.

The 28-year-old Fletcher smashed an unbeaten 84, including five sixes and six fours, as the Windies successfully chased down Sri Lanka’s limp score of 122-9 without destructive opener Chris Gayle.

A Windies team representative told reporters that the 36-year-old had an injury that was “not major” but it raises questions about how much of the remaining tournament he will now play.

An unimpressed crowd at Bangalore’s M. Chinnaswamy Stadium repeatedly chanted “We want Gayle, We want Gayle”, anxious to see the Jamaican who has played several seasons for the city’s team in the glitzy Indian Premier League (IPL). He teased the crowd by stepping out of the bunker with his bat after the third wicket fell, bringing roars from the stadium, only to walk back inside.

“Great team win tonight. The Bengaluru crowd/fans always amazing, sorry y’all didn’t see me bat tonight but I will be back,” Gayle posted on Twitter shortly after the Windies victory.

Fletcher insisted he was not trying to steal Gayle’s limelight after his ferocious knock.

“I don’t think anybody in the world can take his (Gayle’s) place,” Fletcher said. “I’m (just) grateful for the opportunity to bat,” the man of the match added.

The West Indies are one of the weakest teams in Test cricket, but they remain a force in the shortest format and are gunning for their second World T20 title after winning the trophy in 2012.

Andre Russell made 20 not out while Johnson Charles scored 10.

Defending champions Sri Lanka have been struggling for form since winning the trophy two years ago, slumping to seventh in the world rankings.

All-rounder Thisara Perera top scored for the islanders with 40, including five fours, after West Indies captain Darren Sammy won the toss and elected to field. Skipper Angelo Mathews chipped in with 20.

Earlier in the day at Mumbai’s Wankhede Stadium, De Villiers’ quick-fire 64 propelled South Africa to 209-5 and a 37-run defeat of Afghanistan.

The right-handed batsman smashed five sixes and four fours in his 29-ball knock before Chris Morris’s four wickets helped restrict Afghanistan to 172 all out on the last ball.

“He wants to show he’s a world-great batsman and I’m hoping today will make him really, really hungry to go out and score massive runs,” captain Faf du Plessis said of de Villiers.

“Not just to have small impacts of 20-run bursts but actually have a match-changing impact and today he did that. He played beautifully,” he added.

The skipper also lavished praise on Morris, who was named man of the match after he took four for just 27 in the Super 10 Group One match.

“He bowled with great intensity,” the Proteas captain told reporters.

Opener Mohammad Shahzad top-scored for Afghanistan with 44 as the Afghans made a quick start to their run-chase but the gulf in class showed through and South Africa were easy winners.

The convincing victory saw the Proteas get their bid for a first international trophy back on track after an opening day loss to England.

West Indies sit top of Group One on four points with South Africa, Sri Lanka and England all on two.

The Proteas and the Windies play each other in Nagpur on Friday.

World T20 2016 Standings: Who Will Make it to The Quarter Finals