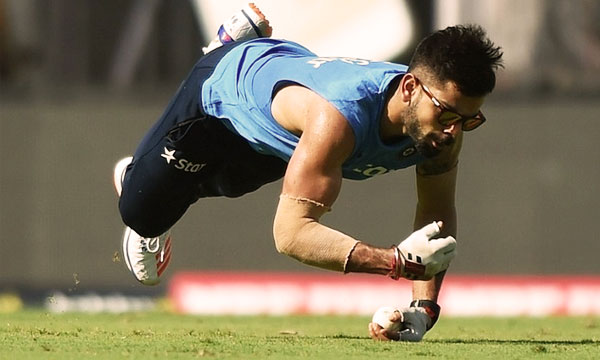 Star batsman Virat Kohli urged his team-mates to stay calm Monday amid growing fervour about India’s prospects in the World Twenty20, ahead of the host’s tricky tournament opener against New Zealand.

After winning 10 of their last 11 T20 internationals, India is red-hot favourites for the World T20 and former batsman Virender Sehwag said last week he was “99 percent certain” they would become the first team to win the trophy for the second time.

But Kohli, who is sometimes regarded as something of a firebrand, tried to put a dampener on expectations in a press conference on the eve of the match in Nagpur and said it was important not to get carried away.

“I think the key is to learn from the past where calmness is required in big tournaments like the ICC (International Cricket Council) events because you can get sort of carried away or over anxious or over excited,” said Kohli, who is India’s Test captain.

“Both those feelings are not great for any side going into a big tournament”.

“What we’ve learned from playing in big tournaments in the past is that we have to stay as calm as possible and focus on the skills that need to be executed on the field.”

India has a woeful track record against the Black Caps in World T20 tournaments, losing four out of their five previous encounters while the other match was rained off.

And although New Zealand has been undermined by inspirational skipper Brendon McCullum’s retirement on the eve of the tournament, their performance in warm-up matches shows they are not lacking for firepower.

They thrashed the holders Sri Lanka last Thursday when Colin Munro, Corey Anderson and Grant Elliott all posted half-centuries in rapid time. Skipper Kane Williamson then smashed an entertaining 63 when New Zealand narrowly lost to England in their final warm-up match on Saturday.

India also suffered a rare defeat in what was an unofficial T20 international on Saturday when they lost by four runs to South Africa in another high-scoring match.

With their powerful openers Shikhar Dhawan and Rohit Sharma hitting a purple patch, and the veteran Yuvraj Singh also in good nick, India will expect to post a big total on a batsman-friendly pitch in Nagpur.

Kohli, in top form himself, said rookie Indian bowlers Jaspreet Bumrah and Hardik Pandya would also be crucial to the outcome, saying they had showed few signs of nerves in their fledgeling international careers.

“Players like Hardik and Bumrah they have more confidence than when we started out,” he said.

“They have performed in different situations and they have brought that confidence with them into the side.

“They have backed their skills and I think this is, what has been the x-factor for us.”

Like many of his fellow skippers, Williamson believes that India is the team to beat but says his side — which is still to win a world cup — do not lack in belief.

“No doubt India will be possibly the favourites for this tournament but I think all the teams will come here thinking they can win it,” he said last week.