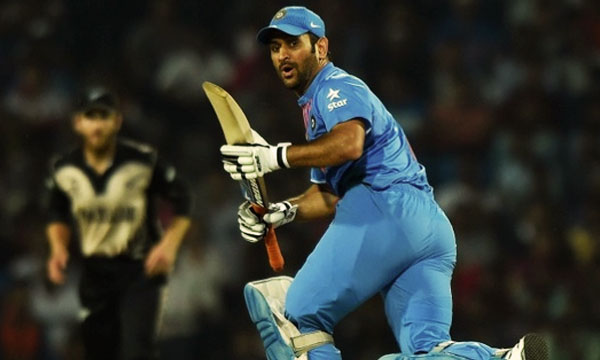 India’s batsmen folded at the hands of New Zealand’s spinners, recording just 79 runs in 18.1 overs — their lowest ever T20 score on home soil — as they tried to chase down the Kiwis’ modest total of 126. India’s previous lowest total at home was 92 against South Africa in Cuttack last year.

“I thought we restricted them to a good total (but) the batting let us down, the shot selection kept putting pressure on the batsmen coming in and there was no partnership in the middle,” said Dhoni.

Hosts India, fresh from winning the Asia Cup, had been firm favourites to become the first team ever to win the World T20 title for a second time, as they began their quest Tuesday in the Super 10 stage of the tournament.

But New Zealand’s slow bowlers stunned the raucous home crowd in Nagpur, with left-arm spinner Mitchell Santner leading the show with a four-wicket haul in a miserly spell.

“They bowled well, exploited the conditions, but we lacked adaptability, we could have applied ourselves a bit more,” Dhoni said.

Santner, whose figures of 4-11 were the best for a New Zealander in T20 cricket, was well supported by Indian-born leg-spinner Ish Sodhi and off-spinner Nathan McCullum, who shared five wickets between them on a slow track.

A delighted New Zealand captain Kane Williamson paid tribute to his bowlers, after conceding that their total was lower than what they had been hoping for.

“But the way the boys bowled was simply outstanding. They get a win to start off a competition against such a tough side like India,” he said.

New Zealand have now won five of their six T20 internationals against India, while the other match was rained off.

India were never in the chase after losing their openers early and, with the exception of Virat Kohli (23), none of the Indian top order could come up with any answers to the inspired Kiwi attack.

Kohli offered some resistance on a slow track during his 27-ball stay, but the introduction of Sodhi brought the end for the star batsman.

Chasing a widish leg-spinner, Kohli was caught behind as the packed stadium was stunned into silence with the writing clearly on the wall.

Dhoni then tried hard to dig India out of their hole but his valiant run-a-ball 30 made little difference in the end.

Earlier, hard-hitting Corey Anderson hit an uncharacteristically slow 34-run knock to help New Zealand improve their plight after being reduced to 61 for four.

A dramatic first over from off-spinner Ravichandran Ashwin saw Martin Guptill smash a six from the very first ball of the match only to lose his wicket to the next, setting the tone for an exciting T20 extravaganza.

The spin-fast combination of Ashwin and Ashish Nehra deployed by Dhoni worked in India’s favour as the Kiwis were left stuttering with Williamson also departing for single figures.

Anderson, whose 42-ball stay included just three boundaries, then stuck around with Ross Taylor and Santner to counter the Indian bowlers.

India didn’t put a foot wrong and backed their bowlers’ effort with some clean fielding that included two run outs.

In the end, Luke Ronchi’s unbeaten 11-ball 21 gave some respectability to the total, which in the end proved enough to make an opening impression in the sixth edition of the tournament.

Pakistan face Bangladesh at Kolkata while England meet West Indies at Mumbai in the two group matches on Wednesday.