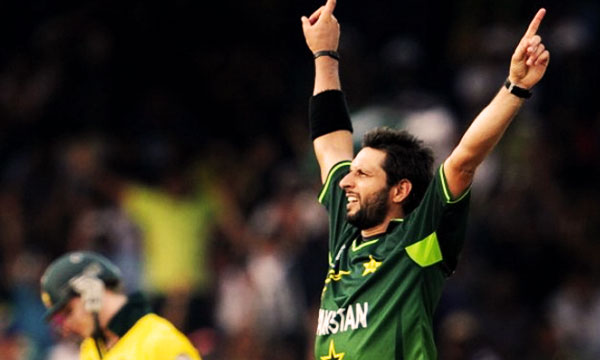 Captain Shahid Afridi’s blistering 19-ball 49 fired Pakistan to 201/5 against a hapless Bangladesh attack in their opening match of the World Twenty20 in Kolkata Tuesday.

“Boom Boom” Afridi, whose batting form had fallen away in recent months, rose to the occasion after promoting himself to number four in the order.

The skipper smacked four boundaries and four sixes to help Pakistan register their second highest score in T20 internationals. Their highest total is 203 against the same opposition in 2009. Opting to bat after winning the toss, Pakistani openers Ahmed Shehzad (52) and Mohammad Hafeez (64) hit entertaining fifties to stitch a 95-run second wicket partnership and lay a solid foundation for others to build on.

The duo combined the right dose of caution and aggression to blunt the Bangladesh bowling attack, forcing the Tigers’ skipper Mashrafe Mortaza to call on six different bowlers.

Shehzad, who was recalled into after missing the recent Asia Cup, reached his fifth T20 half-century in 35 deliveries.

Hafeez was not far behind as the former skipper, who posted his ninth T20 fifty, struck seven boundaries and two sixes in his 42-ball stay.

The only bright spot for Bangladesh was a moment of brilliance in the field when Soumya Sarkar took a breathtaking catch on the boundary rope to bring an end to Hafeez’s innings.

Other than that it was an all Pakistan show, banishing much of the gloom surrounding the side after their recent run of bad form and their delayed departure to India in a row over security.