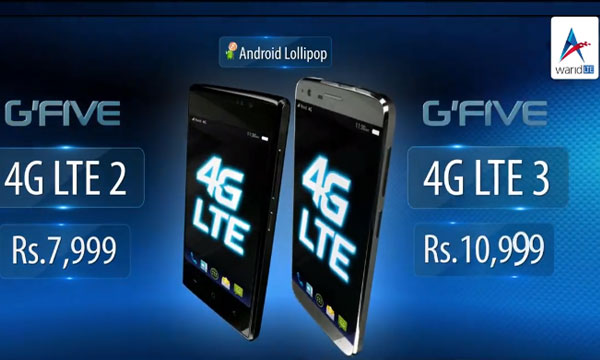 Warid in cooperation with G’Five, has launched two LTE enabled smartphones G’Five LTE 2 and LTE 3 at reasonable prices of Rs. 7,999 and Rs. 10,999 respectively for both its LTE prepaid and postpaid customers.

These LTE enabled smartphones have come up with 15 Months Warranty especially for Warid customers who can buy these handsets from any Business Centre of Warid or can have on their doorstep via making an online order.

Warid offers a free LTE SIM with 2GB LTE data per month for a year on purchasing any of these phones, and no extra charges added to this free service.

Take a look at the TVC:

By introducing these inexpensive devices, Warid has ended the general concept of highly priced LTE smartphones usually considered among the customers. This phone also has a powerful 2200mAh battery but 1GB RAM/ 8GB ROM and 1GHz Quad Core processor are same as in LTE 2.