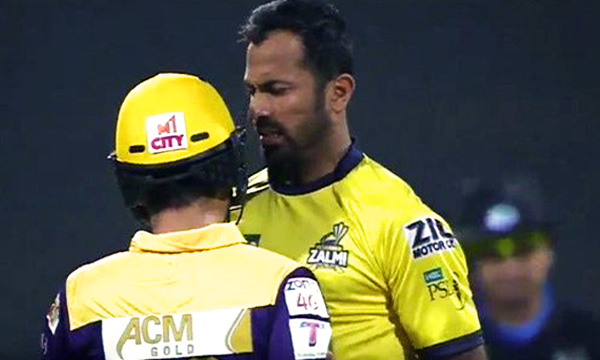 Wahab Riaz of the popular PSL team, Peshawar Zalmi and Ahmad Shahzad from Quetta Gladiators have been quite in the social limelight lately, due to the recent scuffle during the match Pakistan Super League’s match; however tensions seem to be fading away now between the two superb players.

Pakistani left-arm bowler Wahab Riaz regrets his fighting incident with Ahmad Shehzad on the field during a Pakistan Super League (PSL) match in the UAE on Sunday evening.

While talking to Dunya News Wahab Riaz urged the youth to not at all get influenced by this incident.

“Whatever happened, there was a reason behind my reaction but I don’t want to get into details. I would like to urge people not to get any inspiration from that incident ” Wahab said.

The fast bowler Wahab Riaz  recently stated in one his Tweets:

Passion to win and aggression at times makes you do funny things. For all young ones who watched please don't repeat nor get influenced pls.

“Passion to win and aggression at times makes you do funny things. For all young ones who watched please don’t repeat nor get influenced pls.” Wahab and Ahmed Shahzad have been fined off their match fee; Wahab Riaz has to pay to a 40 percent fine while Shehzad, a 30% fine on Monday by Roshan Mahanama, the Sri Lankan match referee after the clash between the players intensified during a match played on Sunday at the Sharjah Cricket Stadium in the UAE.

“Wahab Riaz and Ahmad Shahzad have been fined 40% and 30% of their match fees respectively by the match referee for the altercation,” read an official statement from PSL.

The fight occurred I the fifth over of the match when Wahab aggressively bowled Shahzad out after he just hit a six. Following this, both the players exchanged a few words and even physically hurt each other. The rest of the players then had to intervene and stop the two angry players so as to prevent both from hurting each other further. However, Mahanama noted the incident and called both players for a hearing at the end.

Skippers Sarfaraz Ahmed and Shahid Afridi downplayed the incident saying that similar things happen in heat of the moment. “The fight shouldn’t have happened in the first place because it doesn’t look good but it has happened so we can’t do anything about it now,” Afridi stated.