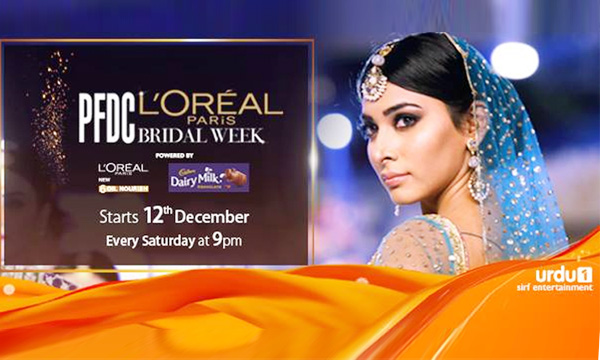 The bridal mania of the season, PFDC L’Oreal Paris Bridal Week (PLBW) 2015, is all set to hit our television screens from December 12th, 2015 at 9pm on Urdu1.

To amplify your wedding wardrobe this winter, catch up with the bridal madness on PFDC L’Oreal Paris Bridal Week (PLBW) 2015 this Saturday. As the shaadi season hits the country once again, Urdu1 has decided to telecast the biggest fashion bridal extravaganza for its viewers.

The fashion gala that was held in September in Lahore this year, will be showcased over four episodes, airing every Saturday from 12th December to 2nd January, 2016 at 9pm on Urdu1.

The fifth edition of the bridal week, one of the greatest fashion industry events, showcased 22 designer labels.

Gear up for some memorable music performances along with the divine models showcasing exquisite designs in the event.

So watch #PLBW15 starting from 12th December, every Saturday at 9pm, only on #Urdu1 and stay tuned to Brandsynario for further updates!