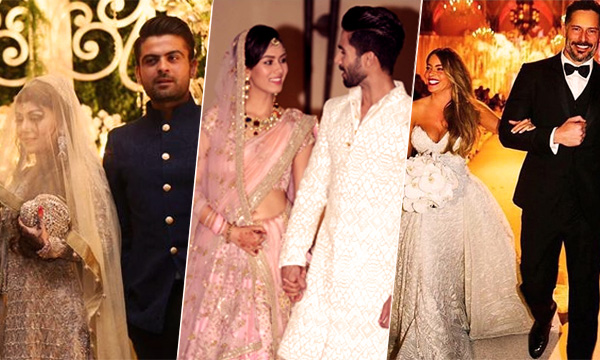 Keeping up with celebrities and what’s going on in their life is our guilty pleasure. Be it an award function or any special appearance for an event, we keep a close eye on celebrities and stalk them like anything. But, things get more excited when it comes to celebrities weddings.

The wisps of love and emotions were noticeable throughout the year 2015 as plenty of famous duos made their relationship official. We have rounded up some grand and big weddings that took place this year.

This is probably one of the most surprising weddings of the year. PTI chairman and former cricketing star Imran Khan exchanged wedding vows with television journalist Reham Khan in January.

The Nikkah ceremony was performed at the residence of Imran Khan in Bani Gala. Unfortunately, the marriage could only last up to ten months and they parted ways in October. Shaista Lodhi tied the knot with her cousin Karachi in June. The wedding event was a private affair and was only attended by the close family and friends. She parted ways with her ex-husband in 2012. The Zindagi Gulzaar Hai actress decided to make her own Zindagi Gulzar and tied the knot with Farhan Hassan in January. The wedding was a grandiose event and was attended by the who’s who of the entertainment world.

The couple even celebrated a post-wedding party in Thailand. Pop singer Annie Khalid made a decision to settle down with London-based businessman Saad Ahmed Khan. The wedding ceremony took place in Lahore on October 6th. The whole wedding was a very low key event and was only attended by her close family and friends.

She was previously married to a Dubai-based businessman, but they parted their ways due to personal reasons.

Famous for his selfies, cricketer Ahmed Shehzad tied the knot with his cousin on September 19th. Shehzad is one of the Pakistani cricketers who pays immense emphasis on looks and he got into the limelight for the same reason on his wedding.

He wore a Faraz Mannan outfit and was looking quite handsome. The reception was attended by many cricketing stars. On May 18th, wicket keeper and batsman Sarfaraz Ahmed said ‘qabool hai’ and started a new innings of his life. Many girls were left heartbroken when one of the most adorable and handsome actors of Bollywood Shahid Kapoor got married to Mira Rajput on July 7th this year.

The wedding was well-celebrated by family and friends; however, the Delhi reception stole the show as it was attended by the celebs of B-town. Our Instagram feed flooded with breathtakingly gorgeous pictures of Sofia Vergara and Joe Manganiello wedding celebrations. The love birds opted to get married just a month back. The wedding was attended by 400 guests and it was surely one of the most fun-filled weddings of the year. Finally, it happened for Jennifer Aniston and Justin Theroux. The Friends co-stars tied the knot in August in a private ceremony at their home in Bel Air. In Bollywood, 2015 kicked off with Chotay Nawab’s sister Soha Ali Khan’s wedding. She got hitched with actor Kunal Khemu. Being Patudi, Soha and Khemu’s wedding got immense media coverage and it was one of the star-studded weddings of the year. Pakistani Celebrities Who Are Best Friends!

Chinese actress, singer and model Angela Yeung a.k.a Chinese Kim Kardashian got married in October to a Chinese actor Huang Xiaoming. She got into the limelight because of her lavish; rather outlandish wedding nuptials.

According to Forbes, the couple spent $31 million on their wedding breaking the record of Kim Kardashian and Kanye West who spent $12 million. Daughter of Maryam Nawaz, Mehrunnisa also got married this year. The Nikkah ceremony of her daughter took place in Masjid-e-Nabwi.

Famous Hollywood couple Ashton Kutcher and Mila Kunis officially declared their marital status months after they actually tied the knot on July the 4th. The couple prefers to keep their private life under covers. They also have a daughter named Wyatt Isabella. Benedict Cumberbatch chose a perfect day to tie the knot with his love interest, Sophie Hunter. They married on Valentine’s Day just a few weeks after announcing that they are expecting their first baby. The much talked about celebrity duo, Johnny Depp and Amber Heard got married in February this year. The couple has been the reason of tongue wagging because of the age difference between Depp and Heard. Just after dating for nine months, the Vampire Diaries star got married to his girl Nikki Reed on April 26th.