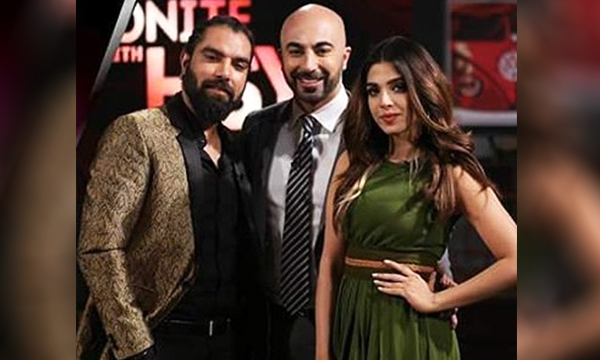 The Tonight show with HSY’s latest season hosted by the dapper Hassan Sheheryar Yasin is definitely not one to be missed. From breaking hearts, celebrity gossips to creating controversies the show has it all!

Recently, Pakistani celebrities, Yasir Hussain and Sonya Hussain appeared on the HSY show. Yasir has been in the spotlight the last couple of weeks due to a remark he passed while hosting a popular award show in the country.

However, did you know Yasir and Sonya were so good at mimicry apart from their stellar acting skills?  Yup, you heard that right! The two were asked to imitate some of Pakistan’s finest actors such as Meera-ji, Reema, Hamza Ali Abbasi, Sahir Lodhi.

Meet Yasir Hussain & Sonya Hussain in #ToniteWithHSY This Sunday at 10:20 PM on #HUMTV

Watch The Video of Sonya Hussain and Yasir Hussain’s Parody of the Pakistani Celebs Here!

The Lahore Se Aagey actor was asked to mimic Sahir Lodhi, which then sounded a lot like Bollywood superstar, Shah Rukh Khan, HSY pointed this out and this is what Yasir said:

Yasir and Sonya absolutely nailed Reema and Meera’s parodies. Sonya could very easily pass off as Meera while Yasir’s parody of Reema will leave in a fit of laughter!

Finally, the duo was then asked to imitate TV show host, Amir Liaquat, and Begum Nawazish Ali. We must say Yasir definitely has a tact for parodies as he was absolutely flawless while imitating the Begum.

What did you think of the parody by Sonya and Yasir?  Let us know in the comments below.