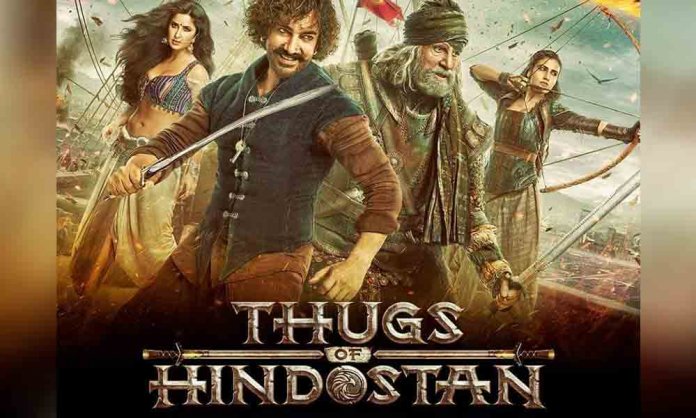 Critics are hating it (because they were expecting Titanic), the audience is not finding it amusing (as Aamir Khan is in a normal role after a long time) and people are behaving as if they were going for Bahubali 3.

However, Yash Raj’s latest venture Thugs of Hindostan isn’t as bad as the reviews suggest. In fact, it has something or the other for the fans of Amitabh Bachchan and Aamir Khan while also appeals to the die-hard lovers of Katrina Kaif and those Bollywood buffs who are curious to see the growth of the young girl from Chachi 420.

Yes, the film doesn’t have a story but it is something more – an amalgamation of Bollywood nostalgia and swashbuckling action with twists and turns that will keep you engaged for the entire run.

What made Amitabh Bachchan the young angry man back in the 70s was the way his character was presented to the audience; from Zanjeer to Deewar and countless other films, it was the way he entered the film that made it a hit or a flop.

#Repost @amitabhbachchan ・・・ From the wilds and chills of Thailand after finishing schedule of TOH .. ‘Thugs of HINDOOSTAN ‘ now ready to go back to the warmth of MUMBAI and home ..

Thugs of Hindostan takes the audience down that very road because when Big B’s Khuda Bakhsh enters the film, he makes it a film. With a pet Eagle soaring above (even if it was CGI induced), Big B’s character towers above all as he fights the British with ease, saves his master’s daughter, dents the ambitions of East India Company and helps the Indians realize that Freedom can be a possibility, even before 1857.

His one-liners, his dialogues and his rendition of poetry make him the most appropriate person to play the character and he does it with the ease of a pro.

When he played an alien, the whole world loved him; when he played a college student, people praised him for his adaptability; as a school teacher he was amazing and that’s one of the reasons why people aren’t expecting him playing a normal character.

That’s the dilemma of being Aamir Khan because whenever he plays something different, people go all-guns-blazing against this Khan of Bollywood.

Andaaz Apna Apna flopped because the audience couldn’t digest him playing a conman then, so why would they accept him with open arms when he does it again.

As Firangi Mallah, Aamir Khan not only pays a tribute to Johnny Depp’s Jack Sparrow (minutely) but also manages to stand his ground against the Shahenshah of Superstars Amitabh Bachchan.

His character makes you laugh, he makes you rethink your priorities and above all, keeps the audience in a limbo regarding his status – the good, the bad or the ugly!

Katrina Kaif appeared 13 times making one-second appearances in the trailer of Thugs of Hindostan and every time she flashed on the screen, the heart of the audience took a giant leap; she only has half a dozen scenes in the movie and a total of 2 dance numbers but that’s enough for the hardcore Katrina lovers who want to watch the beauty queen more and more.

Beauty beyond measure, #KatrinaKaif as #Suraiyya is all set to scorch your screens! #ThugsOfHindostan | @yrf | @amitabhbachchan | @_aamirkhan | @fatimasanashaikh

As for Fatima Sana Shaikh, the young girl from Chachi 420, well she has grown into a woman and surprises the audience with her stunts if not her acting abilities. She is the third Thug of the movie after the two men and gets proper screen time to show her acting prowess, although she needs to work on her expressions to make it big in Bollywood.

The best thing about Thugs of Hindostan is its dialogues although at times the awkward use of Urdu words make you wonder if the writer even knew their meaning! Amitabh Bachchan’s one-liners and explosive dialogues kept the audience captivated back then and will keep them captivated even in the future.

The ones in the trailer are just a tip of the iceberg and if you go into the cinema as an Amitabh Bachchan fan,  you will not come out disappointed. Aamir Khan plays a conman with a heart of Gold and his dialogues with Zeeshan Ayyub’s character are hilarious; his conversation with the British, and characters played by Amitabh Bachchan, Katrina Kaif and Fatima Sana Shaikh are like different flavors, even though he loses his accent in some scenes.

All the lines are short and to the point, unless required and that’s why when Big B has to reply to make the opponent uncomfortable, he uses a single word to catch that person off-guard.

And finally, you get to see glimpses of old Bollywood films in Thugs of Hindostan and if that doesn’t give you your money’s worth, nothing will.

From the Eagle in Coolie to the rebellion against the Brtish in Pukaar, Mard, Lagaan and Mangal Pandey: The Rising, from Khuda Gawah’s iconic fight sequences on horseback to the climax from Vidhaata where the protagonist returns to the most appropriate place for revenge or the grand escape song from Dharam Veer, this film will take you back in time when cinema was different and the audience went in to watch their favorite actors in action, instead of those who wanted to spoil other’s film by posting status updates on social media.

You don’t have to love the film to post a positive status but if you go in with super high expectations from a director who likes to make masala flicks, then it’s your fault and not the makers’. Watch Thugs of Hindostan as a film, not a history lesson and you will come out a happy man. I did!