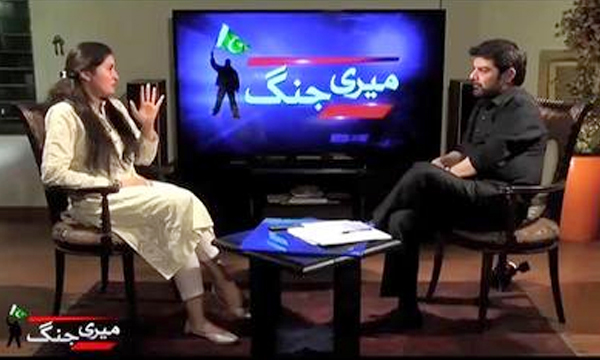 Shaista Lodhi, the former Pakistani TV actress and the host has given an exclusive interview in Mubashir Lucman’s show Meri Jang -aired by Baaghi TV.

Shaista gained fame because of her famous show on Geo TV Good Morning Pakistan, but in may 2014; she became a victim of a big controversy that affected her career.  In an interview with Mubashir Lucman, Lodhi, 43, has revealed the truth behind the Geo TV’s Controversy.

Mubashir Lucman was the same person who attacked the transmission and accused Shaista Wahidi of conducting blasphemous actions on her morning show ‘Utho Jago Pakistan’. PERMA suspended the license of Geo Network to broadcast for fifteen days and Shaista left Pakistan due to her safety concerns.

Shaista has recently come back to Pakistan and has tied the knot with her cousin Adnan.  The talented star is ready to enter the media industry again and has signed a contract with Hum TV. She recently made her first appearance in Hum TV’s ‘Jeet Ka Dum’

See more:  Shaista Lodhi is Back on Hum TV after Arrest Warrants

Watch the Video below:

Mubashir Lucman, however has stated via his Twitter that the interview will not be broadcasted in Pakistan due too Shaista Lodhi’s personal and family concerns:

Whve decided not to air the @IamShaistaLodhi interview.Her life and family is more precious than one show. No regrets on my decision to stop