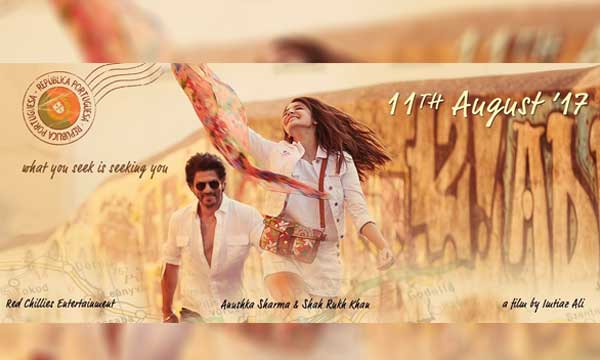 Shah Rukh Khan’s upcoming movie ‘The Ring’ has rolled out the first look and you won’t believe who released it on social media! It was SRK’s bestie and the Dabangg hero, Salman Khan!

You need to see the movie’s glimpse. ft King Khan and Anushka Sharma!

However, as per SRK the title of the movie is still not decided!

Arre I had no idea we are still searching for the title. What to do now??? Go with this date or wot?? https://t.co/wQc4B2OoxC

Nevertheless, the release date of the movie is no more a secret to the world!

While Shah Rukh and director, Imtiaz Ali took to the busy streets of the beautiful European city, their videos from the shooting, courtesy SRK’s fans, were bound to hit the sets. We must admit, that King Khan is looking dashing in his look for the movie.

Check them out here.

Shahrukh N Anushka on set of the ring.@iamsrk#shahrukhkhan#thering#anushkasharma#movies#cool#shooting#bollywood#lisbon#actor#friends#srk#shahrukh#badshah#acting#movie#kingofbollywood#555shahrukh#megastar#superstar#stylist#latest#movieshooting#mood#instadaily#instagram

Shahrukh N Anushka on set of the ring.@iamsrk#shahrukhkhan#thering#anushkasharma#movies#cool#shooting#bollywood#lisbon#actor#friends#srk#shahrukh#badshah#acting#movie#kingofbollywood#555shahrukh#megastar#superstar#stylist#latest#movieshooting#mood#instadaily#instagram

I can't stop staring at this wonderful picture 😍💞 From the top to bottom, everything about anushka is on point. That hairstyle, her face, her tee, those jeans and everything that I've not mentioned is all so perfect! I could never get tired of seeing her this way even if I'd to see it everyday cause this look is what I live for! 😻🌊 No doubt that Tamana's tee attracts you first cause of that sassy thing over it but yes, anushka is bae 🙊👅 I wish to see such a look with different outfits every new day! Well, that ain't possible but yes, rn seeing anushka having sm of fun at Lisbon for the shoot of the ring makes me so happy! 🌴 Every picture; whether its hq or lq, its just so lovely! 🍁 I cannot express my happiness when I see anu happy! She's more beautiful when she's happy and smiling x { #anushkasharma #tamanaazizi #lisbon #thering #bollywood }

When it rains umbrellas…

If u ask and get it…it’s not worth it. Love & Life should be as natural as a baby’s uncontrolled, unasked for hug. #srkinstagyaan

If u believe u can fly…u can..well almost. P.S. B careful of the friction on the pelvic girdle.#srkinstagyaan SRK @iamsrk #AbRam 💕 On the sets of #TheRing #Amsterdam

King Khan on the sets of Imtiaz Ali's next film #TheRing in Amsterdam! 💕📽 . He's so handsome and hotter as ever! I'm in love with this style omG! 😭😍 This laugh make me go crazy literally! 💕🤕 I can't wait for #TheRing very excited 🙌🏼❤

Exclusive [HQ] Pic : Handsome #srk taking selfie with fans on the sets of #TheRing 😍 Looking so cool in blue 💙

@iamsrk on the sets of #TheRing at Prague in #Czech_Republic Europe

SRK on the set of #TheRing in Prague. 💙

#SRK @iamsrk on the sets of Imtiaz Ali's film #TheRing in Prague ..❤️

Imtiaz said I could post this picture from the sets…& promised there will be some close ups of me in the film too!

SRK on the sets of #TheRing in Prague. 💙

@iamsrk on the sets of #TheRing at Prague in #Czech_Republic Europe

Shah Rukh Khan will be seen in his first ever project with Imtiaz Ali taking the directorial command. The film project has been named ‘The Ring’ for now as per the buzz. His leading lady will be the bubbly beauty Anushka Sharma.

This will be SRK’s third movie with Anushka Sharma after Rab Ne Bana Di Jodi and Jab Tak Hai Jaan. Not much is revealed about the movie, however, it is a high-flying romantic flick. The Bollywood film is slated for a 2017 release. “Imtiaz has a different language of love. I told him I wanted to do a happy love story. And this is one, but keeping my age in mind, it’s not an upbeat, young love story. But, Imtiaz has a nice take on it. And hopefully, people will like it,” said Shah Rukh Khan, who will be leading along with co-star Anushka Sharma in the romance film.

Both of the lead superstars will be heading towards Budapest to start filming for this romantic project. Imtiaz Ali has been long  wanting to collaborate with King Khan. Shah Rukh Khan will also be seen in the film Raees with Mahira Khan and a few other diverse movies such as Dear Zindagi alongside Ali Bhatt. The upcoming year appears to be much promising for the B-Town royalty. Let’s wait and watch!

The film also stars Ali Zafar in a cameo role, slated to release on November 25th. Soon after the first look was revealed, Ali Zafar shared a candid photo on his Instagram with the whole cast of Dear Zindagi.

We just can’t wait to see SRK on the silver screen again!