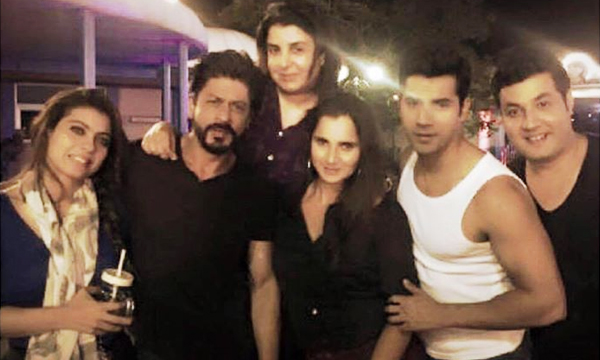 The iconic tennis star, Sania Mirza definitely knows how to charm the King of Bollywood, Shah Rukh Khan on the sets of his upcoming movie, Dilwale.

SRK shared a candid group photo of himself, Sania Mirza, Kajol, Varun Dhawan and Farah Khan on the sets of Dilwale where Sania brought them homemade Biryani. The superstar thanked her through his Facebook Mention accounts.

Termed as the most anticipated movie of 2015, Dilwale will revive the sizzling chemistry between the King of romance, Shah Rukh Khan alongside the 90s diva, Kajol.

The music of the movie has been created by Pritam and the choreographer of the movie is none other than SRK’s favorite Farah Khan herself. There is a particular song in the movie where the magic of Dilwale Dulhaniya Le Jayenge has been recreated in a train scene all over again which has B-town lovers patiently holding their breaths waiting.

The movie is scheduled to release on 18th December 2015.