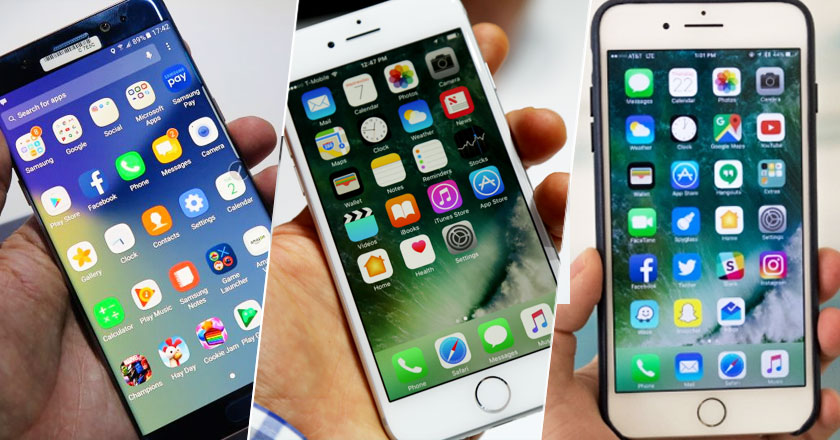 Samsung and Apple, the two titans are having a tough competition with one another through their latest flagships. The Samsung Galaxy Note 7, and Apple’s iPhone 7 and iPhone 7. Both companies have claimed that these are the best phones they have ever made.

Let’s have a close look at these most popular devices to know what’s new is in the offering for their customers.

Samsung has played its cards smartly by giving Galaxy Note 7 dual-edged design like that of Galaxy S7 Edge. This design has a huge attraction among users for having a dual curve from front and all-glass curved back. From the top, it has a new front-facing flash and a sensor while no other changes come to the bottom or sides of the phone.

Contrary to Samsung Galaxy Note 7, minor changes have been made to iPhone 7’s design. The antenna lines have been placed on the side and stereo speaker pushed to the bottom. No other significant alteration in design is visible for the look and feel in iPhone 7 apart from the removal of 3.5mm headphones jack (wireless earphones-AirPods now). iPhone 7 Plus, comes with dual rear cameras and it is the only variation it got in design panel from iPhone 7. Otherwise, both iPhone 7 and 7 Plus bear the same design as their predecessors. iPhone 7 has a 4.7-inch display and not has been upgraded to the latest, cutting-edge technology in display. This 4.7inches IPS LCD display has a resolution of 1,334 x 750 pixels with 326ppi pixel density. The larger variant iPhone 7 Plus comes up with a 5.5-inch display having a screen resolution of 1,920 x 1,080 pixels (401 ppi density). For years, Apple has been using the IPS LCD technology and lagging behind Samsung in this case.

Galaxy Note 7 is powered by Snapdragon 820 SoC / 64 bit Exynos 8890 coupled up with 4GB of RAM. Exynos is one of the fastest processors that clocks a better performance, so you cannot undermine the power of Note 7.

Apple has debuted with the next generation A10 Fusion Chip in iPhone 7 that is 40 percent faster than A9. First time iPhone is coming with a quad-core processor and in iPhone, it is paired up with 2GB or RAM. iPhone 7Plus also boost with same A10 Fusion chip and quad-core processor but with a 3GB of RAM.

Camera front is the key battle point among these latest smartphones and surely iPhone 7 Plus has won the crown.

Samsung Galaxy Note 7 has exactly the same cameras like that of S7. Its 12MP rear cam with f/1.7, 26mm, face detection, autofocus, OIS, LED flash can record video up to 4K resolution The 5MP front camera enable you to make dual video calls.

Apple keeps the tradition of making best smartphone cameras for its iPhone 7 and its 7 Plus. The iPhone 7 features single 12MP primary camera with a f/1.8 aperture, face detection, optical image stabilization (OIS), Quad- LED True Tone flash options. It can capture up to 4K resolution video and the 7 MP front-facing snapper is capable of 1080p video recording. The real surprise package is in iPhone 7 Plus camera section as it does have a double 12MP rear camera with wide angle and telephoto lenses. It offers 2 x optical zoom and digital zoom up to 10 times, double powered than iPhone 7. Having functionality like a Lytro light field camera, these lenses allow you to alter the focus after the picture been clicked. For selfies, it has the same 7MP camera as iPhone 7 at the front.

Samsung Galaxy Note 7 is powered by a 3500mAh battery that sounds incredible for longer life. But a number of cases have surfaced that the device got heat up and exploded while the battery was on the charge, so be careful. Currently, Samsung is looking into this matter and halted further production of Galaxy Note 7.

Samsung Galaxy Note 7 is available at a price tag of USD $897 while iPhone 7 and 7 Plus prices vary as per their storage options.

Note: Samsung has decided to stop all Galaxy Note 7 productions.