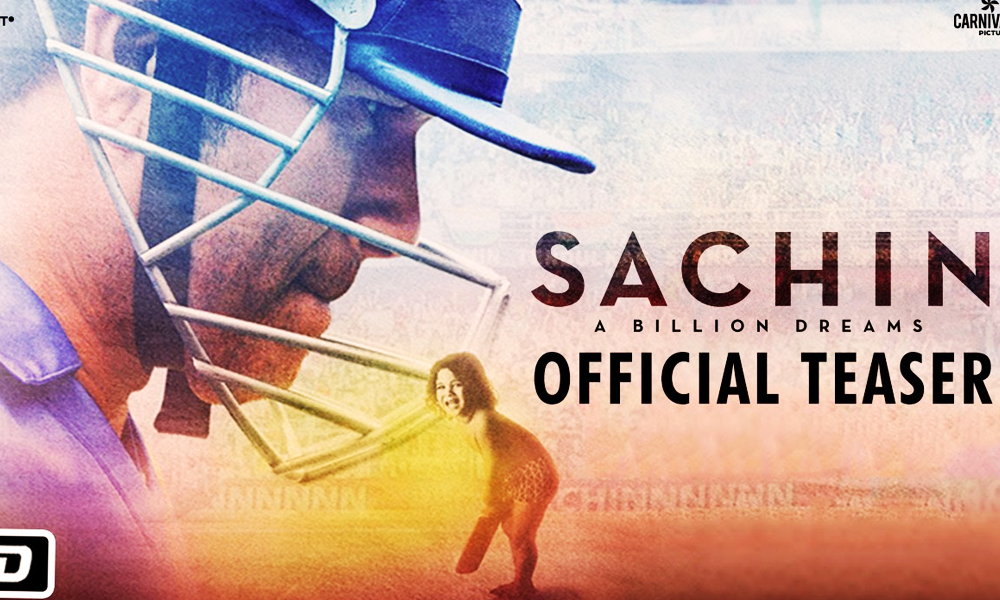 UPDATE: The grand cricket legend Sachin Tendulkar released the teaser poster of the upcoming Bollywood biopic on Monday  named “Sachin: A Billion Dreams”. The 42-year-old celebrity will make his acting debut with this movie. The poster reveals Sachin walking on the field with a bat and his pads on.

The first look of the highly-anticipated upcoming Bollywood biopic, ‘Sachin’ was revealed by Sachin himself! Featuring none other than Sachin Tendulkar in the movie, the first cover sets an intriguing look of the Bollywood flick.

Thank you for all the love and support over the years! Watch the #SRTteaseron14thApril at 1 PM on @SachinTheFilm pic.twitter.com/PEfD2LH3jX

The Bollywood movie will be capturing the personal life of Sachin Teldulkar as he himself features in the movie.

Apart from Sachin, cricketers like Rohit Sharma, Suresh Raina and Virender Sehwag have also shared the picture on Twitter. Everyone seems pretty excited about the movie!

It's time to relive our legend, the one and only @sachin_rt
Don't forget to watch #SRTteaserTomorrow at 1 PM pic.twitter.com/R7glRtqJG3

The movie poster flaunts a tagline “55 Days of Training. One pair of Trousers. The Sachin Story; revealing a few aspects of his life which are unknown to all.

This one I have to watch. Show me NA soon my friend. https://t.co/DeIxqGGc4v

The year 2016 will be raining with biopics as 3 cricket movies come to life based solely on the lives of Indian cricketers. The release date for the movie Sachin has not been decided yet.

Sachin Tendulkar’s film shooting ended on an emotional note: Watch the video below:

One of the most widely popular cricket sensation in the world, Sachin Tendulkar is about to have a movie released which revolves around the occurrences of his life, and that’s not the big surprise.

The Little Master will be making his acting debut by playing himself in the biographic movie.

The film will revolve around the world-famous career of the legendary former Cricketer. The movie will also include his off-the-field personal life activities such as his early years, youth and marriage to Anjali Tendulkar.

Directed by James Erskine, who is known for making movies regarding sports personalities, the movie is marked to be an entertaining Bollywood movie.

Not only will the movie have the former cricketer as the lead actor, but Sachin will also help in filling any lacking details regarding his life and unparalleled career moments.