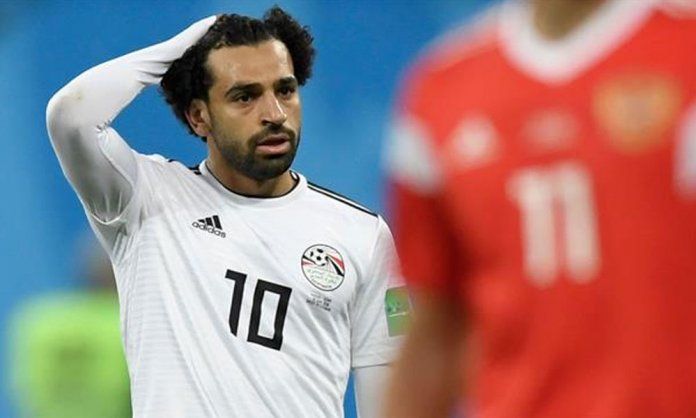 Host nation Russia have one foot in the last 16 of the World Cup after a resounding 3-1 win over Egypt on Tuesday despite the return from injury of Mohamed Salah.

After a tight first half in a rain-drenched Saint Petersburg, Egypt captain Ahmed Fathy scored an own goal before goals from Denis Cheryshev and Artem Dzyuba sealed a win that raises Russian hopes of defying pre-tournament expectations that they would struggle to qualify from their group.

Salah did score Egypt’s first goal at a World Cup since 1990 with a penalty after he had been hauled down 17 minutes from time, but it was too late to regain the momentum for the disappointing Pharaohs.

Russia will be guaranteed a place in the last 16 and Egypt eliminated unless Saudi Arabia beat Uruguay on Wednesday.

Salah was making his first appearance since injuring his left shoulder when falling heavily after being dragged to the ground by Real Madrid captain Sergio Ramos in the Champions League final just over three weeks ago.

Russia thrashed a poor Saudi Arabia team 5-0 in the tournament opener last week, but Egypt had been expected to pose a stiffer challenge.

But after Fathi put into his own net, an inspired Cheryshev slotted in his third goal of the tournament, putting him equal with Cristiano Ronaldo in the top scorers’ chart.

Japan made history in the early game, beating 10-man Colombia 2-1 to become the first Asian side to conquer a South American team at a World Cup.

The complexion of the game was changed radically when Colombia’s Carlos Sanchez was shown the first red card of Russia 2018 for handball in the opening minutes of the contest.

Shinji Kagawa scored from the penalty spot and although Juan Quintero equalised late in the first half, Japan made their superior numbers count, with Yuya Osako heading a winner in the 73rd minute.

Japan’s build-up to Russia has been tumultuous after coach Vahid Halilhodzic was sacked in April and replaced by Akira Nishino, despite steering the team to the finals.

But they will be delighted to start their Russian campaign with a victory after failing to notch a single win in Brazil four years ago — including a painful 4-1 defeat at the hands of Colombia.

“I said at half-time that if we can keep the ball moving, we can deprive the Colombia players of their stamina,” said Nishino.

“Our players were aggressive from the start and I think that worked very well for us. This is just one win and three points, so we will save our celebration.”

In the other Group H clash on Tuesday, Senegal recorded the first African win at this World Cup when they beat Poland 2-1, thanks to a deflected Thiago Cionek own goal and a terrible error by Polish goalkeeper Wojciech Szczesny, which resulted in a goal for man-of-the-match Mbaye Niang.

West Bromwich Albion midfielder Grzegorz Krychowiak got Poland back in the game with an 86th-minute header but Senegal hung on at Moscow’s Spartak Stadium.

In a match billed as a straight fight between Robert Lewandowski and Sadio Mane, neither scored but Liverpool striker Mane set up Idrissa Gueye for the shot that took a wicked deflection off Cionek, leaving Szczesny totally wrong-footed in the Polish goal for Senegal’s opener on 37 minutes.

Senegal coach Aliou Cisse said the whole of Africa was closely monitoring the progress of Senegal.

“Senegal today represents the whole of the African continent,” he said.

“Of course we represent our country but I can also guarantee that the whole of Africa is supporting us. I’m getting phone calls from everywhere.”