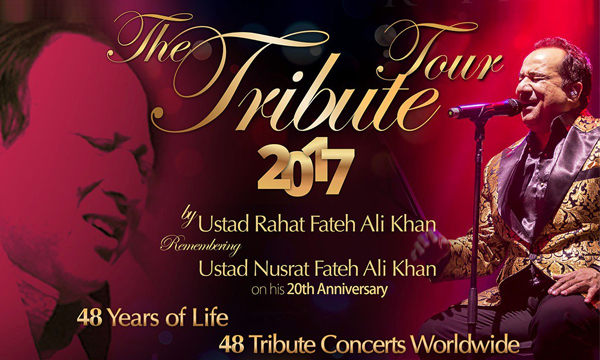 Rahat Fateh Ali Khan has announced that he will be holding a whopping number of 48 concerts in 48 cities worldwide to pay tribute to the beloved Qawwali legend, Nusrat Fateh Ali Khan.

He spoke of this upcoming endeavor in a press conference that was held at the Flatties Hotel in Lahore.

“We endeavor to pay tribute from across the globe in as many as 48 cities with 48 concerts to mark his life with the high esteem of 48 years”, said Rahat Fateh Ali Khan.

All proceeds from the concerts will be donated to a fund for the establishment of a music academy in Lahore which will bring in trained musical from across the world to teach the youth of Pakistan.

A career as a musician is not one that is typically favored in our society and Rahat proposes to make that change to bring forth a revival of music in the country.

The veteran actor Shaan, who was also present at the press conference, proclaimed, “After that, we will send them abroad to promote Sufism internationally to complete the mission of Khan sahib.”

The tour plans to commence January 2nd in Faisalabad, the hometown of both musicians and will conclude in London- the place where Nusrat passed away.

Dehli is also marked as one of the tour destinations but since the recent bad blood between Pakistan and India, they are unsure of the venue.

However, Salman Ahmed, a team member, stated, “If things between India and Pakistan would get improved by that time, we shall hold a music concert there.”

This highly anticipated concert is one that will surely go down in history and keep Nusrat Fateh Ali Khan’s memory alive.