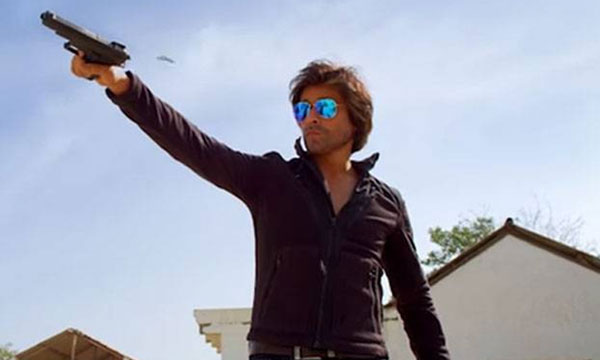 Aijaz Aslam plays the role of an honorable police officer, Sultan. He is the elder brother of Samir (Sahir Lodhi) and also married to Sana. The bond between dewar-bhabi is strong. Samir is a young man with ambitions but fails to secure a job because of lack of strong references and it appears that for most of the jobs he applies to, he is over qualified.

Bara Don (Shamoon Abbasi) and Chhota Don (Naveed Raza) are smugglers and partake in the hideous crime of human trafficking. Sultan, being a righteous police officer plans to bring down bara and chhota don but one of Shamoon’s gunda shoots him as a result of which Samir comes across Naveed. While facing the don brothers and trying to bring them down, Samir becomes notorious.

Raasta is a wasted attempt to engage the audiences. Lack of good script, bad performances, and equally bad music, Raasta fails to impress on every level. Sahir Lodhi, though a great TV show host and radio personality is not exactly big screen material. His acting falls short of the mark in Raasta. His dialogues and delivery looks forced rather than natural and graceful. Aijaz Aslam is a brilliant actor of TV but he also fails to impress in the movie. Every scene seems to be more intense than the last. Not every scene needs to be full of intensity unless it’s the demand of the script. Instead of coming out and looking a cool guy, Naveed Raza looks more like a mentally challenged person because of his dialogue delivery, body language, and expressions. Shamoon Abbasi has given some great performances in the last couple of years. This is not his best by far but he is the only one who rather performs decently. Saima Azzar & Abeer Rizvi are not big screen players; their performances, body language, and diction is proof enough that they don’t belong. Raasta is all about Sahir Lodhi. It’s probably the only movie in the history of Pakistani cinema where there is narration after every fifteen minutes. And the narration is by none other than Sahir Lodhi. So, Raasta is a movie with 80-90% of Sahir Lodhi’s screen presence, and if he isn’t there we can hear his voice narrating events and incidents.

Plot of Raasta is not original. In fact, it is a poor replica of 70’s & 80’s Bollywood movies. A few scenes from Amitabh Bachchan’s Deewar from 1975, Sunny Deol’s Arjun from 1985 and Jackie Shroff’s Gardish from 1993 along with a mix up with Shakti (1982) and you get Raasta. Cinematography and settings of several songs are also inspired from Bollywood. Dil Faqeer song is inspired from Suraj Hua Maddham (Kabhi Khushie Kabhi Ghum) and Teri Ore (Singh Is King). Mathira looks vulgar is “Yaar Sajjan Main Launra Channiya”.

Raasta is the waste of time and money. There is no repeat value, neither in performances, songs nor in the script.

Shafiq Siddiqui is a Digital Marketing Strategist and Inbound Marketer. He loves to blog. He is a movie buff and can’t stay away from commenting on movies, performances, and art. His weakness is scrumptious food.