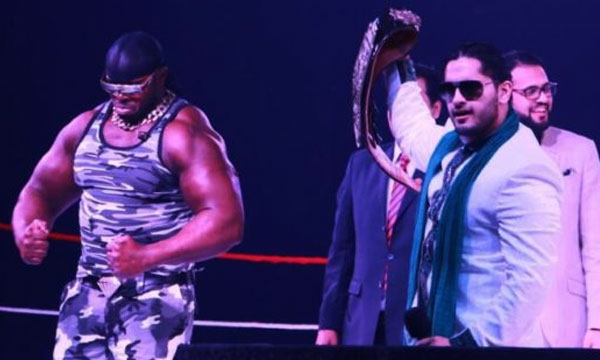 Pro Wrestling Pakistan is finally here, and Lahoris got the chance to get the first official look at the championship title!

To makes things more interesting, Pro Wrestling Entertainment will amuse wrestling fans consecutively from May 17 to May 21 in Karachi, Lahore and Islamabad. For those who did not know, the title is 100% made in Pakistan which makes it absolutely unique from other titles. According to a report, the first PWE event will be happening on May 17 at Abdul Sattar Edhi Hockey Stadium in Karachi, the second at Punjab Stadium in Lahore and the final in Liaquat Gymnasium, Islamabad.

The shows will include multiple styles of wrestling, including singles and tag team. However, the main attraction will be the winner of the tournament at the end of the final show, who will become the inaugural PWE World Heavyweight Champion.

PWP’s official theme song, Dangal Hai, composed and sung by Nauman Javaid and Ahsan Pervaiz Mehdi was also performed at the official launch of the title.

“I was approached and asked to come up with this song on April 13 and had only two days to finish it. It had to match international standards and encompass that aggression of pro wrestling, yet have an Eastern flavour because the event is happening in Pakistan.”- Ahsan Pervaiz Mehdi

“There are vast nutrition and lifestyle changes. And you have to forget the fact that you are in pain because it goes on for days. I have a wrestling school in Austria and let me tell you; only about two out of 100 students finish and actually become pro wrestlers.”– Killer Tickets for the matches will be available for purchase online, with price starting from Rs500 onwards.