Home Lifestyle Travel Prague’s Chapel of Bones Will Leave You in Awe!
Advertisement 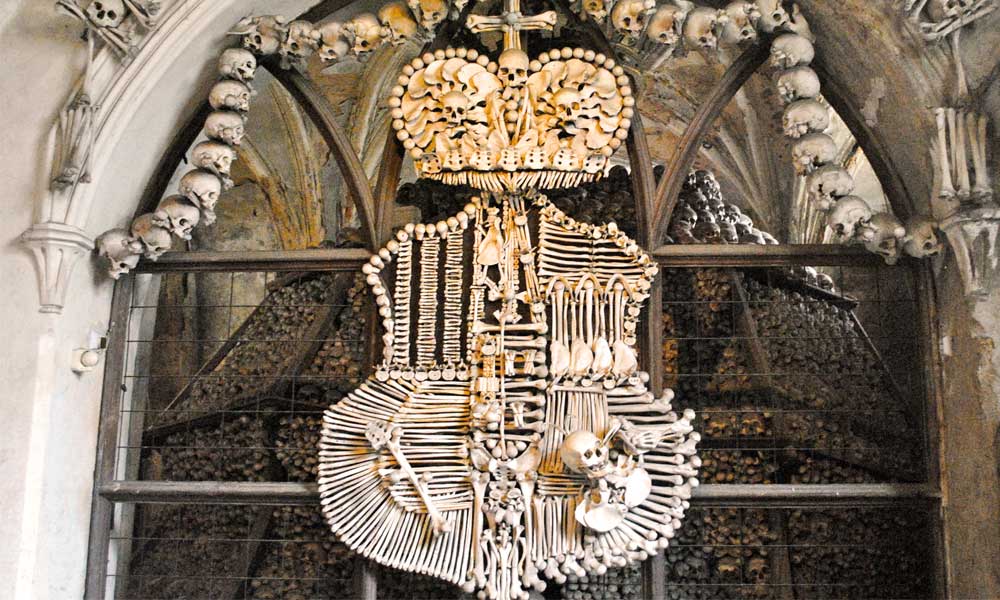 I was excited about my trip to the Czech Republic. It is a landlocked country in Central Europe bordered by Germany to the west, Austria to the south, Slovakia to the east and Poland to the northeast. The capital and largest city, Prague, has over 1.2 million residents. Prague has many historical attractions from majestic squares and imposing towers to Prague Castle and Charles Bridge. It is the Charles Bridge that is really fascinating and of course Prague Castle is the premier tourist attraction. More about Prague in my future articles but today let us talk about Kutná Hora which is about one and a half hour by bus or train from Prague.

I had heard about this church made out of human bones in some newspaper in Pakistan, but I was not aware that it was so close to Prague. It was in the hotel lobby that I discovered this day trip to Kutna Hora and the Chapel of Bones. Excited I asked the hotel desk and they informed me that I can book the trip not far from the hotel on one of the main streets. Exactly as informed I found the sign for this trip and a very helpful lady booked me for the trip next day.

I was there on time as timing is of the essence in that part of the world. If I had been late by even ten minutes the tour would have departed without me. We were only six people in the bus, but it departed on time. I am sure that even if I was alone the bus would have departed on time. There are no excuses in this part of the world to cancel a tour or make lame excuses to get out of an obligation.

It is a long winding road from Prague to Kutna Hora with farm houses and flat landscape that whizzes past the bus window. We reach the Chapel of bones and full of anticipation got out of the bus in front of the chapel gate. Immediately as you enter you can see that this is a graveyard with graves cleanly lined up side by side. Right in front of you is the entrance to the Chapel of bones.

But first, a little about the town itself.

The town began in 1142 with the settlement of the first Cistercian monastery in Bohemia. By 1260 German miners began to mine for silver in the mountain region, which they named Kuttenberg, and which was part of the monastery property. The name of the mountain is said to have derived from the monks’ cowls (the Kutten) or from the word mining (kutání in old Czech). Under Abbot Heidenreich the territory greatly advanced due to the silver mines which gained importance during the economic boom of the 13th century.

Silver dinars have been discovered belonging to the period between 982–995 in the settlement of Malín, which is now a part of Kutná Hora.

The Sedlec Ossuary (Sedlec is a suburb of Kutna Hora) is nothing spectacular from the outside. You would think that it is just an average old medieval gothic church. That is until you enter the ossuary to find the most amazing chapel in the world.

An ossuary is a chest, building, well, or site made to serve as the final resting place of human skeletal remains. The Sedlec Ossuary is a small Roman Catholic chapel, located beneath the Cemetery Church of All Saints in Sedlec. The ossuary is estimated to contain the skeletons of between 40,000 and 70,000 people, many of whom have had their bones artistically arranged to form decorations and furnishings for the chapel.

Henry, the abbot of the Cistercian monastery in Sedlec, was sent to Palestine by King Otakar II of Bohemia in 1278. When he returned, he brought with him a small amount of earth he had removed from Golgotha and sprinkled it over the abbey cemetery. The word of this pious act soon spread and the cemetery in Sedlec became a desirable burial site throughout Central Europe. During the Black Death in the mid-14th century, and after the Hussite Wars in the early 15th century, many thousands of people were buried there and the cemetery had to be greatly enlarged.

Around 1400 a Gothic church was built in the center of the cemetery with a vaulted upper level and a lower chapel to be used as an ossuary for the mass graves unearthed during construction, or simply slated for demolition to make room for new burials. After 1511 the task of exhuming skeletons and stacking their bones in the chapel was, according to legend, given to a half-blind monk of the order.

Between 1703 and 1710 a new entrance was constructed to support the front wall, which was leaning outward, and the upper chapel was rebuilt. This work, in the Czech Baroque style, was designed by Jan Santini Aichel.

In 1870, František Rint, a woodcarver, was employed by the Schwarzenberg family to put the bone heaps into order. The macabre result of his effort speaks for itself. Four enormous bell-shaped mounds occupy the corners of the chapel. An enormous chandelier of bones, which contains at least one of every bone in the human body, hangs from the center of the nave with garlands of skulls draping the vault. Other works include piers and monstrances flanking the altar, a large Schwarzenberg coat-of-arms, and the signature of Rint, also executed in bone, on the wall nears the entrance.

This, I can assure you, is the most unusual chapel you will ever see.

As you enter the Chapel of bones, you will soon realize why it is one of the most amazing and unique churches in the world. The Sedlec Ossuary is artistically decorated by more than 40.000 human skeletons.

Thus, it is also known as the Church of Bones or as the Bone Church. 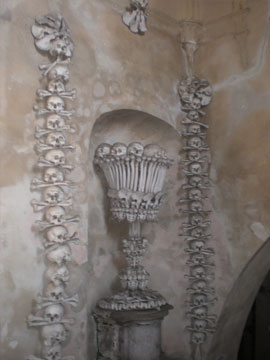 One of the most fascinating artistic works inside the Sedlec Ossuary is the big chandelier of bones that lies in the center of the Church of Bones. The immense chandelier contains at least one of every human bone.

Another impressive artwork is the coat of arms of the Schwarzenberg family that is also made of human bones. While there are other macabre places to visit in Europe this is really unique in nature. 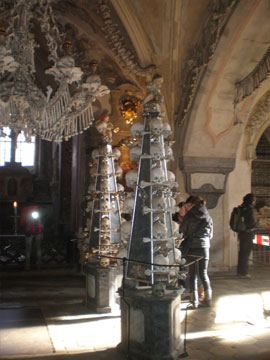 As you walk down the steps into the main area of the chapel you are wonderstruck by the rather Macabre decorations and the big Chandelier of bones hanging over your head. Surprisingly you will most likely not find it to be scary, but peaceful.

I look at the skeletons and the gaping holes where once eyes peered out over the world and wondered what stories these eyes could tell if they could speak. No more talk just look at the pictures and try to get a feeling of the place.

Zia Ul Islam Zuberi is a free lance writer and has more than 5000 articles in English and Urdu to his credit. He has written on a variety of subjects including social and political issues, travel , film reviews and sports. His articles have appeared in leading publications like Akhbar E Jehan, MAG, Dawn, Star, Leader, Daily News,  Business Recorder, Nawa E Waqt, Quomi Akhbar etc.  He is the author of one book ” Awaz E Khalq” which is a collection of his published articles.He is a retired Director Communication for a  major multinational Corporation operating in Pakistan.