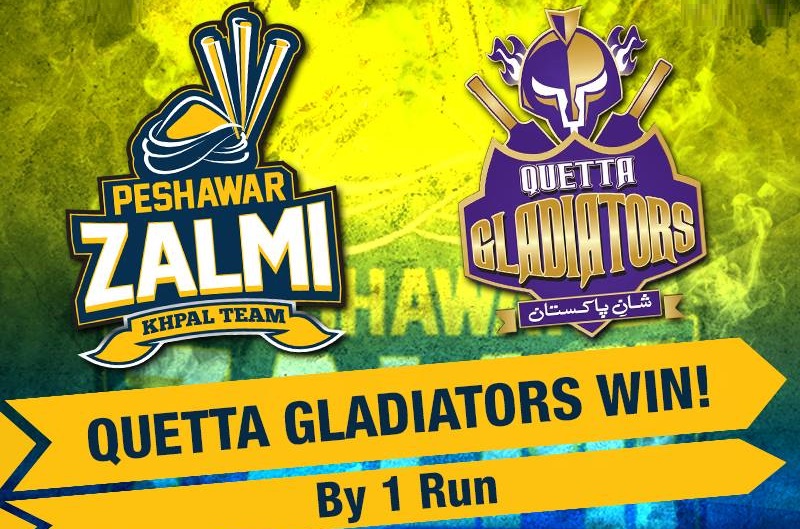 UPDATE: The underdogs, Quetta Gladiators have qualified for Final of PSL T20 2016 after beating the hot favorite Peshawar Zalmi by just 1 run in a nail biting game of cricket. What a sensational match it turned out to be in jam packed Dubai International Cricket Stadium, and after twists and turns, Aizaz Cheema of Gladiators won a last ball victory for his team by just 1 run.

Peshawar Zalmi won the toss and put Gladiators to bat first and they got all out on 133 in 20th over despite Kevin Peitersen’s magnificent half century under pressure.  Gladiators could not capitalize the chance of scoring 150 plus runs provided by KP (53 runs). Wahab Riaz (3-17) and Shaun Tait (2/23) helped in restricting Gladiators to a low total.

.@TeamQuetta ARE THROUGH TO THE FINAL!

So who wants to rewatch the epic, UNBELIEVEABLE final moment from tonight? (Longer video on our FB page) #PZvQG pic.twitter.com/BQIgmByQAs

Defending 133, Quetta Gladiators were exceptional in bowling specially the young Mohammad Nawaz, who bowled out in form Hafeez and Brad Hodge on two consecutive deliveries that did the real damage to Zalmi’s. Darren Sammy (38) and Wahab Riaz (22) kept the hopes alive for Zalmis till end and they ended up just 1 run short to the victory. Aizaz Cheema bowled a tight last over and sealed the victory for this side.

Peshawar Zalmi and Quetta Gladiators will clash in the first playoff of HBL PSL T20 2016 today in Dubai International Cricket Stadium, a battle that will decide the first finalist of this league.

It will be an exciting contest today between two strongest teams of this event and a huge crowd is expected to be in stadium as its Friday, the weekly holiday today.

The first #Playoff between the two giants of #HBLPSL is tonight!
Come and Support #khpalTeam!#ZalmiRocks pic.twitter.com/YRXMBnhLGs

Though both teams have won against each other in the first stage of the league, the odds are favoring Peshawar Zalmi as they are more balanced of the two and have a number of match-winners in the team. The way Zalmi bowlers flattened Quetta’s batting line in the second league match after Afridi and Wahab’s heroics, they can create problems for the opponents again.https://twitter.com/PeshawarZalmi/status/700358179914412032

After a strong performance in #HBLPSL fixtures, its time for #Playoffs! Come & support #khpalTeam!#ZalmiKaJunoon pic.twitter.com/7mYoJl13p3

After a strong performance in #HBLPSL fixtures, its time for #Playoffs! Come & support #khpalTeam!#ZalmiKaJunoon pic.twitter.com/7mYoJl13p3

Quetta Gladiators have undoubtedly performed beyond expectations and no one would have thought that this team will play the first playoff. Their fighting spirit and teamwork have driven them to a 2nd position in the league, but their bowling is comparatively weaker than Zalmi’s lineup. The two highest scores have been scored against Quetta so far and they even chased down a 202 once, that will boost the confidence of their batsmen.

One thing is for sure, the captain who will win the toss will definitely go for chasing a total; in night matches of Pakistan Super League, the teams batting second always have a higher winning ratio based on past match experiences.

The on-field atmosphere will be pumped up and all the players will be fully charged for the challenge. The Wahab-Shahzad face-off would be interesting to see after the scuffle both had in the previous game; although they have exchanged some positive messages on social and news media.

Passion to win and aggression at times makes you do funny things. For all young ones who watched please don't repeat nor get influenced pls.

It surely is a real test of nerves for Shahid Afridi and Sarfraz Ahmad; we will have to see who leads his side to success. Well, it is a matter of just a couple of hours and we’ll know who will rock the match and who will choke.