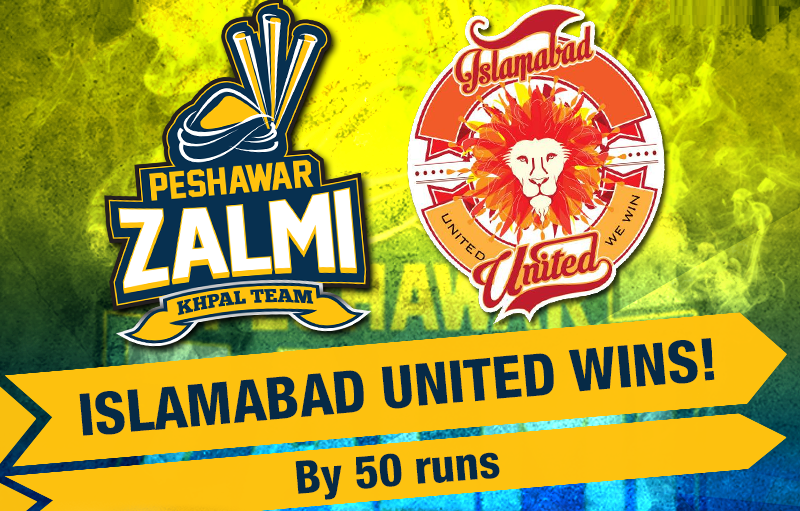 UPDATE: The hot favorite for the title Peshawar Zalmi has been sent home by Islamabad United as they won the 3rd playoff easily by 50 runs and become the second finalist of HBL PSL T20 2016.

What a magnificent three figure knock played by United’s Sharjeel Khan 117(62) that helped his side to score 176-3 in such a pressure game. Zalmi bowling line up looked totally off color and the first half was all about Sharjeel Khan’s show of sixes and fours and he was the obvious choice for man of the match award. Chasing a huge total in the crucial game, Zalmi were never close to it and their batting line up collapsed on just 126. United’s spinner Imran Khalid bowled superbly for his 4-20 figures.

Peshawar Zalmi and Islamabad United will be in a showdown today in the 3rd playoff of HBL PSL T20 2016 to become the second finalist of the title.

Islamabad United is confident to keep up the winning momentum and Zalmi has to fight with valor to this challenge as Misbah would surely give them a tough time to them to make through to the final.

Zalmi although lost by just 1 run in the first playoff, them team must have forced themselves to rethink their batting strategy. Their middle order batsmen must take the responsibility and should stay on crease to lead their side to victory. For Islamabad United, this time they have the greater challenge ahead; Peshawar Zalmi is a much stronger opponent than the Karachi Kings.

The deciding match for a spot at the #HBLPSL Final is happening tonight!
Come and support #khpalTeam!#ZalmiKaWaar pic.twitter.com/9aBgs59hp1

As far as experts’ opinion and predictions are concerned, Peshawar Zalmi is the favorite for today’s match and they also are a better unit than United, but United is in a position of knocking out Zalmi this time.

Both sides are being led by two senior lads who have captained Pakistan’s national side and they have enough experience of such crucial matches. The individual performance of Shahid Afridi and Misbah ul Haq will matter a lot in this match in addtion to their game plan.

Once again, the side winning the toss will try to take full advantage of the dew factor, let’s see who is going to win the toss and the match for his side to take on Gladiators in the final, Afridi or Misbah?

The excitement for this big match is on its peak:

Who's excited? Two awesome sides in a show down @PeshawarZalmi & @IsbUnited competing for a chance at the trophy. Bring it on #PSLt20

Australian @bradhodge007 is excited about his teams performance so far & is positive about tonight!#ZalmiRisesAgain pic.twitter.com/kILiVUdt6G