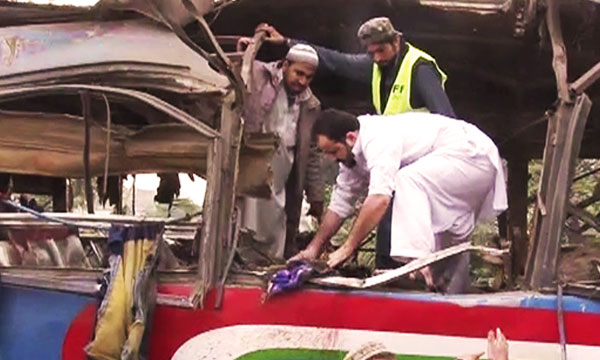 At least 16 people were killed and more than two dozen wounded when a bomb blew up inside a bus in Peshawar, the main city of northwest Pakistan, officials said, with the toll expected to rise. The explosion took place in Saddar, a busy shopping district, as the bus was picking up government workers to take them to their offices.

“At least 16 people were killed and more than 24 were wounded in a blast on a government employees’ bus,” senior police official Mohammad Kashif Zulfiqar told AFP. Another police official and hospital officials also confirmed the incident and casualties.

Bomb disposal officials said that it was a four kilogramme (8.8 pounds) Improvised Explosive Device (IED) fitted with a remote control detonator and planted near the bus’s gas cylinder, amplifying the blast. Talking to reporters at the site, Abbas Majid Marwat, another senior police official, said that the bus was transporting government employees from the northwestern town of Mardan to Peshawar.

Rescue workers at the site were seen taking the injured from the blue bus and carrying them out on stretchers to the waiting ambulances.

Other injured were scattered near the site and some were picked up by rescue workers on their shoulders.