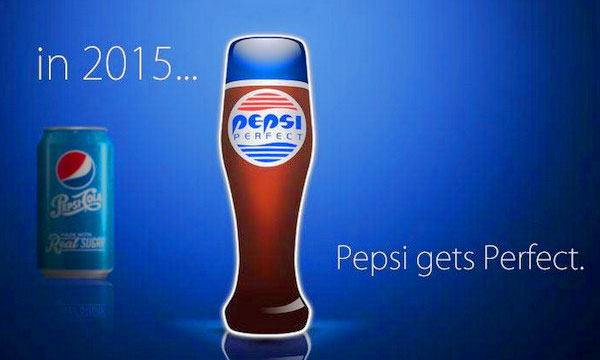 Pepsi has released a limited edition Back to the Future bottle called ‘Pepsi Perfect’ as an homage to 21st October 2015 – the day Marty McFly travelled forward in time to in the much-adored movie ‘Back to the Future II’.

The Senior Director of Marketing for PepsiCo., Lou Arbetter, has stated, “Pepsi fans asked and we heard them loud and clear. The Back to the Future trilogy was as big a moment in pop culture history then as it is now, 30 years later. We are excited to be part of this moment and to bring fans something only Pepsi could deliver – and there’s no need to wait – the future is now!” These limited edition bottles are a seemingly exact replica of the ‘Pepsi Perfect’ Marty McFly can be seen in the 1989 movie – and so, another one of Back to the Future’s predictions for 2015 has come true. However, according to the marketer who procured the product placement deal between Pepsi and Back to the Future way back when, the futuristic Pepsi was also supposed to have minerals and vitamins as ingredients, making it good for your health – an interesting detail that the actual ‘Pepsi Perfect’ drinks of 2015 are unlikely to possess. The internet has been awash with celebrations and memes about 21st October 2015, with a resurgence of love and appreciation for the blockbuster movie in the older generations. That said, younger generations are most likely left scratching their heads in confusion.

With the release of the bottles, a special advertisement has also been aired, featuring a setup similar to the Back to the Future movies – including hoverboards and ‘futuristic’ hairstyles and fashion.

These special-edition Pepsi bottles are $20.15 each, and a total of 6500 of them are available for purchase.

Take a look at this Video: