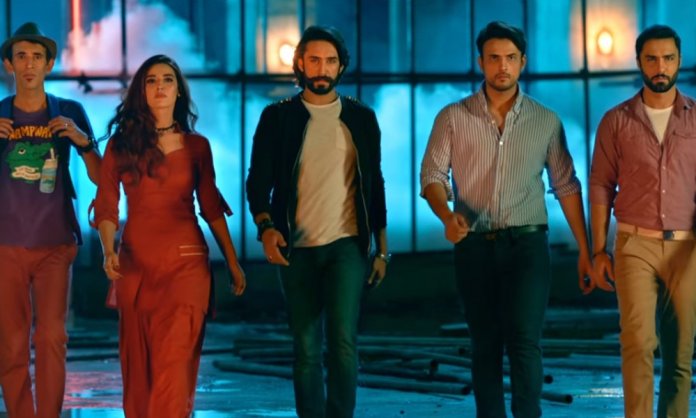 If you have kids who don’t listen to you, don’t send them to watch Imran Raza Kazmi and Azfar Jafri’s latest offering Parchi – they will take it as a gift as it seems to have been written with them in mind.

Shafqat Khan’s script resembles that story which your granddad narrate to you without the help of something in writing and after a while it wanders off in a direction from where it can’t be recalled.

Acting wise the film could have been a benchmark but with characters like Bash, Saqi, Zodiac, Virgo, Pisces, you can have a good school drama but not a feature film at the expense of the audience.

Four friends (Ali Rehman Khan, Ahmed Ali Akbar, Usman Mukhtar, Shafqat Khan) find themselves in trouble when one of them takes the local gangster Zodiac (Shafqat Cheema) head on; they go to the rival gang leader Eman (Hareem Farooq) for help and end up in bigger trouble as everything goes kaboom due to their incompetence.

Will the four guys be able to pay back the parchi to the local gangster or will they meet their end … watch it to know the answer.

Shalu-Alu, ahh forever my favorite nickname for someone! Happy (Belated) Birthday!! I’m going to pretend that it hasn’t been two days since you birthday (even though by the time you read this in Pakistan its probably three days) and pretend for a few minutes k aaj tumhari salgira hai! 🎉 I hope you ha(d)ve a wonderful day with all your family and friends, get all the gifts you ever want, eat as much cake as you desire, and make memories that will last you a lifetime! May ALLAH bless you with all the happiness in the world my cutiee! 💜 I’ve actually been stalking your page for the past few days trying to get inspiration for your VM, and when I saw how much youve been posting about #Alreem and #Parchi I was like BAM, Billo Hai & Mauja Hi Mauja! Let’s do it!! 🔥 Then just to make sure, I posted the poll about Alreem on my story just to be sure and thank goodness you chose the “Yaaasss” option because I would’ve been back to the drawing board! 😬 I hope you liked your very own Parchi-fied VM! Love you Shalina, and Happy Birthday again! 😘🎉 @shalinaaaaaa @obsessiveperson @alirehmankhan @hareemfarooq @ahmedaliakbarofficial @theusmanmukhtar

The film’s saving grace are the two amazingly choreographed dance numbers Billo and Imagine by Osman Khalid Butt and the cinematography by Usman Mukhtar. Sadly, the same can’t be said for the rest of the flick where the director’s attention was more into the styling of the characters than on the characters.

It was really sad to see theatre imports Faizan Shaikh, Ahmed Ali Akbar, Mojiz Hasan and Talal Jilani get wasted considering their talents (Mojiz should have been Bhola, period). Hareem Farooq makes the Madam role her own but is shown a softie giving her near-perfect portrayal a flaw – the character was heavily inspired from Fukrey’s Bholi Punjaban but Bholi was hardly a softie and that’s why the makers brought her back in the sequel.

Ali Rehman Khan was brilliant in Janaan but here he nothing compared to that role. Not only did he look like Ranvir Singh, he tried to carry the same swag and failed – the amount of time he uttered the word sweetness will make the audience diabetic for sure.

The idea of using internet comedian Faiza Saleem as the mother of one of the insignificant characters was as bad as having Shafqat Khan play Bhola – no matter how hard he tried he couldn’t pass on as a vet considering he was one of those characters who possessed none of the five senses. In fact, every time he opened his mouth to deliver a Javed Jaffery-esque line (from Dhamaal), this scribe wanted to slap him for breaking the tempo of the film.

For all those out there criticizing the idea of remaking a Tamil film without permission, trying to make an original film with the help of toilet humour, kiddy jokes, cool nicknames and bad script is as big a crime.

Instead of moving up on the ladder after experimenting with Siyaah and beautifying Pakistan through Janaan, IRK Films takes a step back coming up with a film that no sane person could appreciate, no sane individual could relate to and no sane person could recommend to another.

Who keeps a blind man in a gang or takes him out on errands such as robbing somebody’s house; who stores money in their freezer; who sleeps all day and does nothing yet lives in a lavish one-room apartment with two lazy friends and a hard working brother.

Even Govinda films had better storyline and execution – you can’t win ’em all with 2 songs and amazing cinematography. Content has to make the audience content with the blow on their pocket, not the blow on their mind.