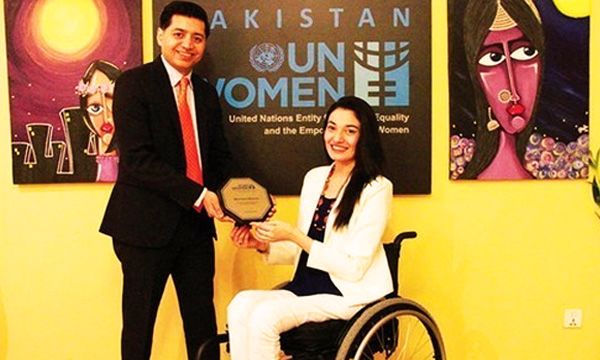 Muniba Mazari, has been officially instated as a Goodwill Ambassador by UN women shortly after being shortlisted among the 100 Inspirational Women of 2015 by the BBC this November.

Her role as the newly appointed goodwill ambassador calls for constant advocacy of gender rights and empowering women along with her acting as an incessant supporter of various women-oriented campaigns under the aegis of UN Women such as the “Planet 50-50 by 2030: Step It Up for Gender Equality”.  Muniba Mazari also stressed upon the need for young girls and women to be empowered in Pakistan.

She further highlighted the importance of gender equality and women empowerment at the official UN event held in Islamabad. “I am a strong supporter of UN Women and the role we have in ending gender-based discrimination, and working towards gender equality, making it a lived reality by 2030.”

She also added, “We need to educate both men and women if we want to eliminate gender-based discrimination from the country and from the world, and for this we’ll have to work together as one.”

She took to Twitter to express her gratitude for all the support and appreciation she has been receiving since the bestowal of the status, “Thanks for all your prayers, love and support. I’m humbled to be the 1st #UNwomen ambassador in #PAKISTAN.”

We need to educate both men & women that if we empower one woman, we empower whole generation! @UN_Women #Pakistan pic.twitter.com/EqNXRBcEEJ

Muniba Mazari has supported education staunchly in many platforms in the past and has been equally vocal about women empowerment. She radiates hope, motivation and positivity and is fit to be regarded as a role model.

Thanks for all your prayers, love and support. I'm humbled to be the 1st #UNwomen ambassador in #PAKISTAN 🇵🇰 pic.twitter.com/YpEIvOOUYL

She has not allowed her physical limitations to confine her abilities and has garnered respect as Pakistan’s first ever paraplegic TV anchor and motivational speaker.