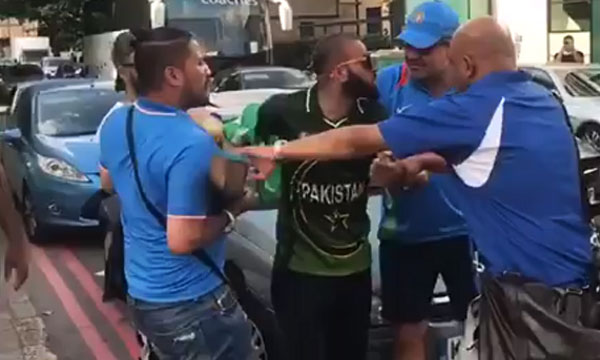 Pakistan came back with a bang, and swept the ICC Champions Trophy 2017 from right under the defending champion’s, India’s, nose!

Pakistanis all over the world celebrated their team’s victory, however unfortunately, there were a few who decided to pick a fight. After the conclusion of the much awaited Pakistan vs India final, as fans proceeded outside the stadium, a bunch on Indian fans got into a clash with a Pakistani supporter.

A clip of this incident was shared on Twitter, which shows how the Indian fans grabbed the Pakistani fan even making a grab at his throat.

There were a few bystanders , who witnessed this incident, however, they chose to ignore the fiasco and let it go on.

Here’s a glimpse of what went down outside The Oval

Cricket is a powerful sport which we as Pakistanis and Indians take seriously, however, it is a sport and there will always be a winner and a loser. Great character becomes prominent , where the finest of men meet on the ground and make sure the attitude stays there

Lets keep the glory of the sport within the stadium, bloodshed is not the answer, where there is a winner, there will be a loser too, accept it.