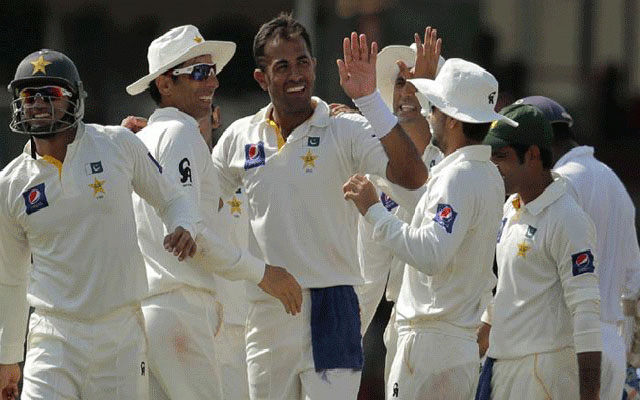 UPDATE:  Scoreboard at lunch on the first day of the first Test between England and Pakistan at Lord’s on Thursday:

Azhar Ali not out 7

Younis Khan not out 18

That match saw Amir and Pakistan new-ball partner Mohammad Asif deliberately bowl no-balls on the instructions of then captain Salman Butt as part of a sting operation carried out by a tabloid newspaper.

All three received five-year bans from cricket and, together with sports agent Mazhar Majeed, jail terms.

For all his time out of cricket, the 24-year-old Amir retains the ability to swing the ball late at sharp pace, as he showed with a first-innings haul of three for 36 in Pakistan’s drawn tour opener against Somerset before he was rested from last week’s draw with Sussex.

This was Pakistan’s first series in England since 2010 and Thursday’s match was the 42-year-old Misbah’s first appearance at Lord’s.

England had already named their side on Wednesday, with Nottinghamshire quick Jake Ball given a debut in place of James Anderson, England’s all-time leading wicket-taker.

Anderson, although eager to prove his fitness following a shoulder injury, was left out of England’s squad for this match even though coach Trevor Bayliss and captain Alastair Cook were reportedly keen for him to be included.

Ball has taken 37 first-class wickets at an average of just 22 so far this season.

Before the start of play he was presented with his Test cap by his uncle and former England wicket-keeper Bruce French.

England, who recently won a three-match home series against Sri Lanka, recalled Gary Ballance to their batting line-up after Nick Compton opted to take time out of cricket.

Joe Root was set to fill Compton’s place at number three — even though his Test average as a top three batsman is under 34 compared to the mark of more than 63 batting at four or five.

Ballance was due to bat at number five.

An initially sunny day at Lord’s would have encouraged Misbah to bat first although the skies had clouded over a touch after he won the toss.

But so good have the pitches been at Lord’s this season, that all of Middlesex’s County Championship matches at the ground have ended in draw. This is the first of a four-Test series

The 1st Test match between England and Pakistan cricket series will be played today at 15.00 PST at Lord’s Cricket Stadium. Mohammad Hafeez will be opening the innings from Pakistan’s side. Shan Masood will be the other opener. Mohammad Amir, Imran Khan, Yasir Shah and Wahab Riaz will be leading the pace attack. Yasir Shah will be the only spin bowler in today’s Pak vs England test series opening match.

The match will be starting at 3 pm Pakistan Standard Time (PST) and 12 pm at British Standard Time (BST). Ten Sports and PTV sports will be live broadcasting all the matches in UAE and Pakistan. TV Channels like ESPN Sports, Star Sports, Super Sports, Sky Sports & Fox Sports might be broadcasted live. The series is made up of 5 ODIs, 4 Tests and a T-20 match.

Misbah-ul-Haq will be the captain of the national test team while Sarfraz Ahmed and Azhar Ali will lead the team in Twenty20 and ODIs. Head Coach Mickey Arthur has revealed a 12 member squad for the 1st test match against England.

There is a tie between Imran Khan and Rahat Ali being the 11 man in the squad which will be finalized once the head coach and captain are consulted.

Pakistan will be playing a test series in Lords stadium after 6 years.