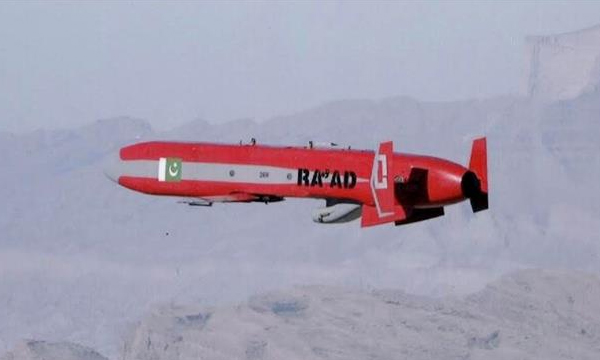 Pakistan conducted a successful flight test Tuesday of a locally developed cruise missile named “Ra’ad” with a range of 350 kilometres (around 218 miles), the military said.

“The state of the art Ra’ad ALCM (air-launched cruise missile) is equipped with highly advanced guidance and navigation system that ensures engagement of targets with pinpoint accuracy,” the military said in a statement. Tuesday’s test is the latest in a series carried out by Pakistan and its arch-rival India since both demonstrated nuclear weapons capability in 1998.

Relations between Pakistan and India — which have fought three wars since independence from Britain in 1947 — have always been fraught, but soured further last August amid a rise in clashes along their borders and a row over a Pakistani diplomat meeting Kashmiri separatists.

Last week, India’s Foreign Minister held talks with her Pakistani counterpart Sartaj Aziz in Islamabad on the sidelines of a regional summit on Afghanistan, where they jointly announced they would resume high-level peace talks.