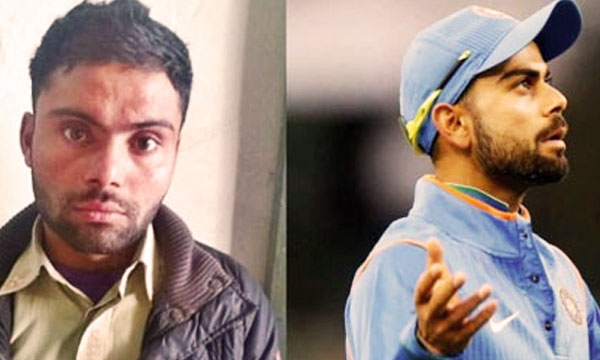 A Pakistani cricket fan who was arrested for waving the flag of India after his idol Virat Kohli struck a match-winning knock was denied bail Friday as he faces the prospect of up to a decade in prison.

Umar Daraz, 22, was jailed on January 26 for celebrating with India’s tricolour after batting star Kohli’s 90 not out led his team to victory over Australia in a Twenty20 match in Adelaide.

The act was termed “against the ideology of Pakistan” by police. He said that Daraz has been charged with violating public order and “sovereignty of Pakistan” laws.

Regional Police officer Faisal Rana had said at the time of Daraz’s arrest that could face up to 10 years in prison and a fine.

“Daraz initially told us that he is a true Pakistani but likes (Indian) Kohli and never knew that was a crime,” Rana told media.

“His act is against our country’s sovereignty and is against the ideology of Pakistan.”

Rana also accused Daraz of having large posters of Kohli pasted on the walls of his home.

Daraz’s arrest came weeks before Indian student leader Kanhaiya Kumar was arrested on a controversial sedition charge in a case that has sparked a major row over freedom of expression.

Nuclear-armed neighbours Pakistan and India have a long history of animosity dating back to independence from Britain in 1947, and have fought three wars.

Indian Prime Minister paid a surprise visit to Lahore to meet his Pakistani counterpart in December, raising hopes for the revival of peace talks.

But an attack on an Indian air base in January that New Delhi alleges was carried out by a militant group based in Pakistan has once again stalled the dialogue process.