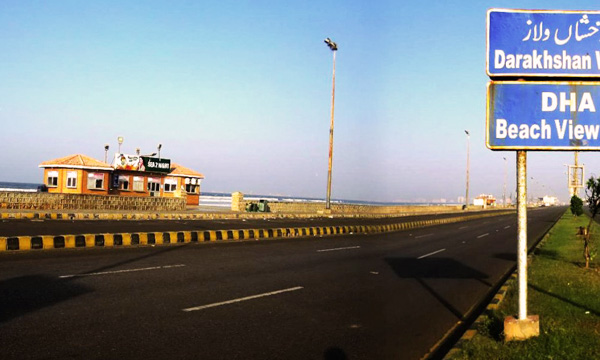 The major trunks going towards Sea view will be blocked for vehicular traffic six pm onwards.  The traffic police have shared alternate routes for traffic and for citizens residing in the blocked area.

The vehicles traveling towards Sea view from Korangi and Akhtar colony taking the Khayaban-e-Ittehad route will not be permitted to enter whereas the traffic will have to take a detour to Regent Plaza, Shahrah-e-Faisal, Teen Talwar, Club Road, Shahra-e-Iran, Do Talwar, 26th Street and head towards the McDonald’s at Seaview by taking a right turn. The 26th Street, Shaheen Signal, Khayaban-e-Bahria’s intersection and main Shujaat signal will be open for the residents of Defence phase V, VI and VII to go towards the phase VIII area.

The entire region around Bilawal Chowrangi from Boat Basin will be sealed as well as the KPT bridge will be off limits whereas the traffic can take the road leading to Jinnah Bridge from Boat Basin.

No vehicles will be allowed to move from Mai Kolachi road to the Submarine Chowrangi 9 pm onwards.

Sunset Boulevard leading to the Punjab Chowrangi won’t be accessible except the Korangi road route.

The entire signal from the Defence Library  gong to Street # 2 will also remain inaccessible.