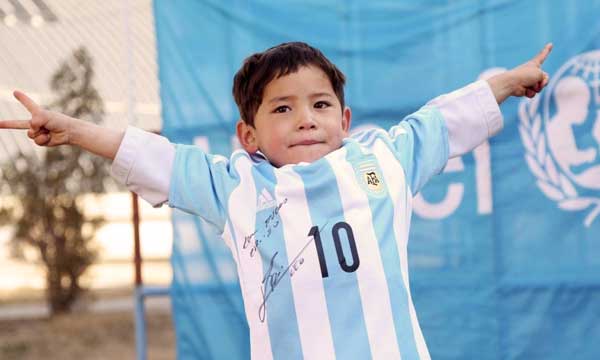 Argentine football star Lionel Messi has sent not one, but two jerseys to the five-year-old Afghan boy who became an Internet sensation last month when he was pictured wearing a plastic bag with “Messi” scrawled on it in marker pen.

Murtaza Ahmadi travelled with his family from eastern Ghazni province to Kabul to receive the gifts sent by Messi through UNICEF, where he is a goodwill ambassador.

Messi autographed the jerseys, writing “With much love” in Spanish on them, and added a football to the treasure trove, UNICEF said.

Purchasing a Messi jersey was beyond the means of Murtaza’s poor family, members of the persecuted ethnic Hazara minority living in volatile Ghazni, near Kabul.

His elder brother Homayoun, 15, improvised the blue-and-white-striped plastic shirt with Messi’s name scrawled in black marker and posted the photos of Murtaza wearing it on Facebook in mid-January. 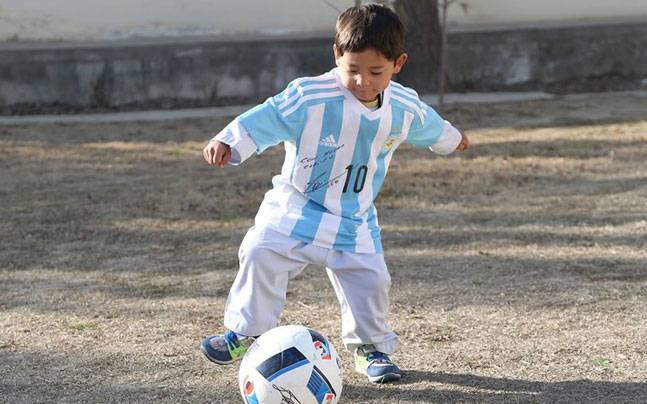 The image touched a chord with football fans around the world, and earned Murtaza the sobriquet “little Messi” on social media.

The Afghan Football Federation had said Messi was in contact with them to arrange a meeting with Murtaza as soon as possible, with the Spanish embassy in Kabul telling AFP it would do whatever possible to facilitate.

But a source close to Messi’s entourage said earlier this month they could neither confirm nor deny the speculation regarding a possible meeting.

Setting up a meeting in Afghanistan, in the grip of a fierce Taliban insurgency, is fraught with security challenges.

Football and cricket are the two most popular sports in the war-ravaged country — but sports were rarely played under Taliban rule, and the football stadium in Kabul was a notorious venue for executions, stonings and mutilations.