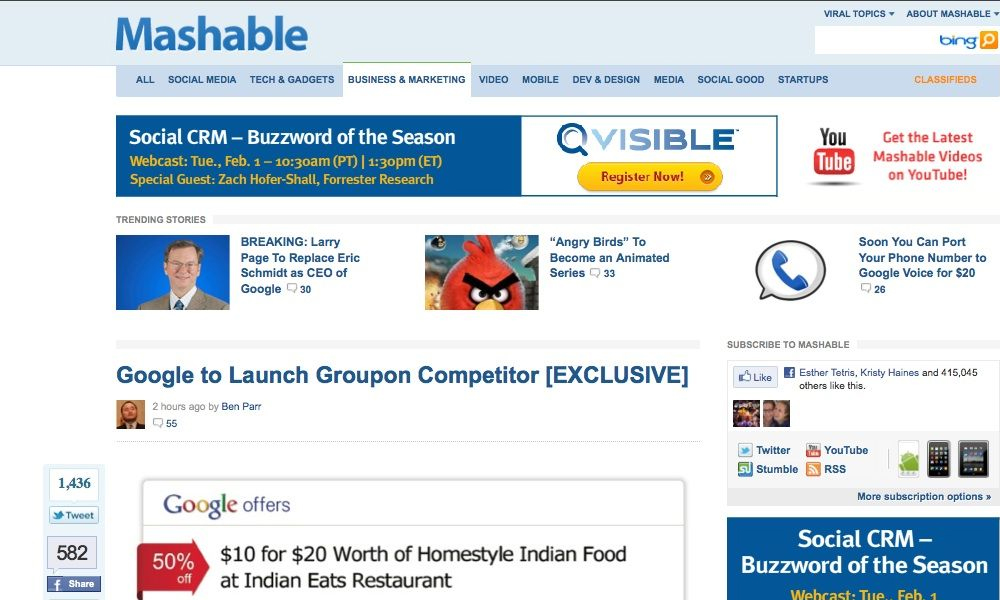 Online news pioneer Mashable announced a shakeup of its top staff Thursday as part of a reorganization to focus on video and its core news areas of lifestyle and entertainment.

Mashable, which was launched in 2005 and now has some 45 million readers around the world, said executive editor and chief content officer Jim Roberts would be departing along with chief revenue officer Seth Rogin.

Founder and chief executive Pete Cashmore said the changes were part of a shift in strategy which will de-emphasize world news and politics.

“To reflect these changes, we must organize our teams in a different way,” Cashmore said in a memo on his LinkedIn page. 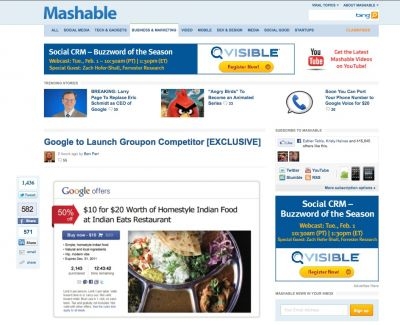 “Unfortunately this has led us to a very tough decision. Today we must part ways with some of our colleagues in order to focus our efforts.”

The memo offered no further details on staff reductions, but some reports said cuts would eliminate the political team and others.

Cashmore said Mashable made a “tough decision to move away from covering world news and politics as standalone channels” and would focus on its “core” sectors of technology, web culture, science, social media, entertainment, business and lifestyle.

“We’ll also develop our real-time news coverage, keeping our audience up to date on breaking news and cultural trends being discussed on social networks,” he added.

Cashmore said he is “focused on growing Mashable across every platform.”

He called a staff meeting “to explain how media is changing and how we’re positioning ourselves to stay ahead of the market.”

The group last month announced it had raised $15 million in a funding round led by Time Warner’s television operations, as part of its efforts to expand video offerings, and that this element was important to Mashable’s future.

“The newest platforms in our lineup include over-the-top video networks and television,” Cashmore said in his memo.

As part of the new focus, Mashable announced a reorganization of its teams, “which will bring a unified voice across all platforms,” according to a statement.

“To realize the massive opportunity that these platforms represent and to keep our voice consistent across every platform, it’s clear that all our video producers should live on the same team,” Cashmore said.

New appointments announced include Greg Gittrich as chief content officer, who previously held the same post at media-tech firm Vocativ, according to a statement from Mashable.

Mashable in recent years has launched editions for Asia, Australia, India, France and Britain in addition to its US edition.