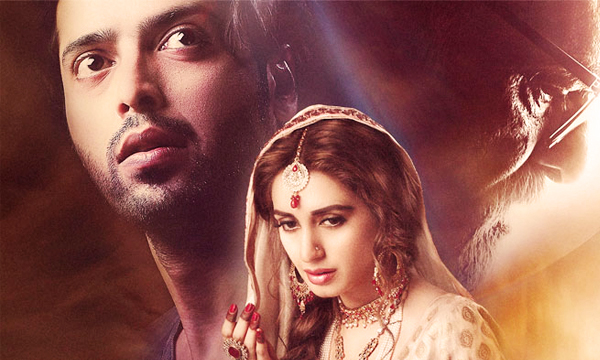 The lead cast of the upcoming movie Mah-e-Meer met on the media launch of the first song ‘Us Ka Kharam’. The movie songs are to be released one after another before the official movie release.

Mah-e-Mir is produced by Sahir Rasheed and Khurram Rana, written by Sarmad Sehbai and directed by Anjum Shehzad.

The first song of Mah-e-Mir has attempted to portray Iman Ali as Rekha of ‘In Ankhon Ki Masti’. Here’s the video of the song ‘Us Ka Kharam’:

After listening and watching the video of this particular song, you will instantly be able to relate it with ‘Chaltay Chaltay’ from Pakeezah and Mughal-e-Azam’s ‘Pyar Kiya toh Darna Kiya’. Besides Iman Ali, the song also stars Fahad Mustafa and Alyy Khan.

The video definitely has that peculiar Nawabi feel with intense expressions and dramatic sequences. The film revolves around the struggles of a modern poet parallel to the life of the famous poet Mir Taqi Mir; the music director of the film is Shahi Hassan.