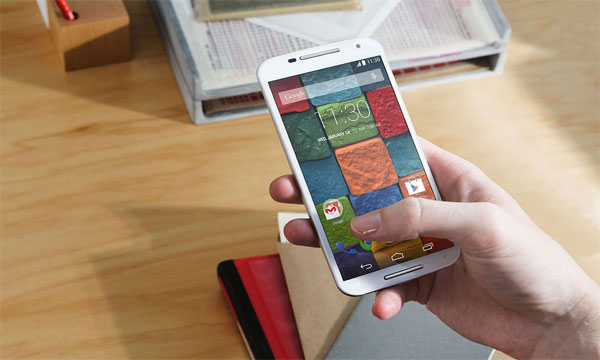 Chinese computer titan Lenovo showcased a series of new smartphones Thursday, including a keenly-awaited Tango handset and new Moto Z models that can be transformed into video projectors or powerful speakers. PHAB2 can sense and map its surroundings, enabling holograms to be overlaid on real world settings for anything from game play to figuring out which size sofa would fit in a room.

The big-screen gadget will be available globally in September for $499.

“It is a pretty incredible piece of technology for, really, a great price,” said Tango engineering director Johnny Lee.

In what Lenovo chief executive Yang Yuanqing billed as perhaps the most important announcement at the event, Lenovo also unveiled new Moto Z smartphones that can be customized with “mods” — specialized pieces of hardware that snap into place magnetically to give handsets added capabilities.

For example, one mod let a Moto Z project video on walls or ceilings at sizes as large as a 70-inch television screen.

“This phone can transform itself,” said Hollywood star and Lenovo spokesman Ashton Kutcher.

“This is actually a full-blown game-changer.”

Lenovo also launched a smartphone mod program for developers, enticing them with a million-dollar prize for a mod that best integrates handsets with services hosted in the Internet cloud.

Moto Z will be available in the United States in coming months through carrier Verizon, with models debuting globally later in the year, according to Lenovo.

Pricing was not disclosed.

Moto Z is made by Motorola, which Lenovo bought from Google in early 2014 in a deal valued at $2.91 billion.

The acquisition was part of a strategy by Lenovo to look beyond personal computers, where it is a market powerhouse, to a future of nearly everything being smart and connected to the Internet, according to Yang.

“Devices will become entry points for diverse content and services,” he said.

Lenovo’s core business will remain personal computers, but it wants to use its expertise to combine hardware and cloud capabilities to help devices “listen, see, sense and understand the world,” according to Yang.

Lenovo’s innovative offerings showed that the company is committed to smartphones even though it only broke into the market with the purchase of Motorola, according to Gartner principal research analyst Mikako Kitagawa.

“They are really catching up as a late-comer to the market, but they are already successful,” Kitagawa said.

“I am pretty happy about the innovations I saw today.”

Lenovo innovations included a smartphone with a shatterproof screen, which Kutcher demonstrated by dropping a handset from high above the stage.

“This gave us an idea. What about a screen that won’t break?”

Hortensius also provided a peek at work Lenovo is doing on smartphones and tablets that can bend.

YouTube star Meghan McCarthy wrapped a prototype smartphone around one wrist like a bracelet and folded a tablet in half while watching a cat video.

“This isn’t a product yet, but it is a sign of things to come,” Hortensius told the audience.