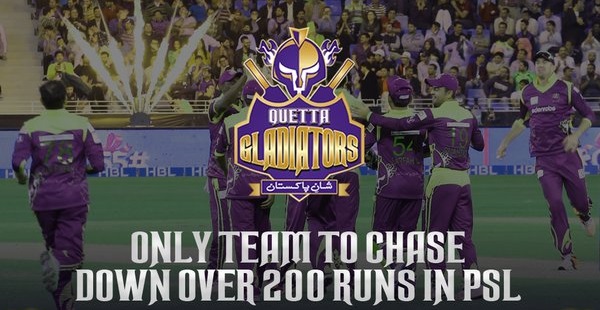 UPDATE: Quetta Gladiators has chased down highest total of 202 in PSL T20 2016 successfully against Lahore Qalandars on the very last ball of the match. What a thrilling contest it was between Qalandars and Gladiators and we saw some very good cricket from both sides.

Lahore Qalandars batting first, set the highest total on the board of 201-2, surpassing their previous record of 194 runs that too was against Quetta Gladiators. The star batsmen Chris Gayle (60), Umar Akmal (55*) and Azhar Ali (61) delivered what Qalandars needed from them. In chase of this huge target, Gladiators were on the kill and stunned all by successfully going over the line for the loss of eight wickets Mohammad Nabi scored 15 runs that were required in the last over.

Opener Bismillah Khan playing his first game of the PSL T20 2016 was a surprise package who scored 55 runs of 30 balls and given Man of the match award in the end. Sangakkara 37 and Kevin Pietersen 34 runs proved vital for the Gladiators victory. It could have been an easy run chase for Gladiators if their captain Sarfraz Ahmad have not played that rash shot on Ehsan Adil’s bowling who dismissed both captain and Sangakkara in the same over.

31 needed off the last three overs. Its quite possible in T20s but @lahoreqalandars have all the momentum. #LQvQG

.@KumarSanga2 and @SarfarazA_54 look set to chase down this total! Anything can happen though! pic.twitter.com/vsQukv4Fw7

TALENT IS MY MIDDLE NAME!@Umar96Akmal shows off his class! Rematch three of his best sixes! #LQvQG pic.twitter.com/daTjC33oM9

Lahore Qalandars will be facing Quetta Gladiators today in Dubai International Cricket Stadium to go ahead to the playoffs in the inaugural HBL PSL T20 2016.

Lahore has a fair chance to qualify for next stage because the team still has to play two games, and in case they win both, they will be seen in action in playoffs. Peshawar Zalmi, Quetta Gladiators, and Islamabad United have already qualified for the playoffs.

It won’t be easy though for Qalandars to beat Gladiators as they are one of the top sides and now the seasoned Kumar Sangakkara is also in the playing eleven. All they need to show the fighting spirit on the field which was seen in the previous game against Peshawar Zalmi.

This is the last match of Quetta before the playoffs so they might rest a few key players to come up with new energy in the all important playoff match.

For Lahore Qalandars, Umar Akmal and Chris Gayle have to stay on wicket to get a big score and their fielding will play an important role too as too many dropped catches and ordinary ground fielding have cost them a couple of matches in the this league.

All eyes will be on Lahore Qalandars that how they perform on the field to keep them in the competition.

In case of a three way tie on points between teams, the collective win loss record between these three teams is taken into account over NRR

Congratulations to @IsbUnited for becoming the third team to confirm a place in the playoffs of the inaugural season of the #HBLPSL!

Stay tuned to Brandsynario for more updates on the match.