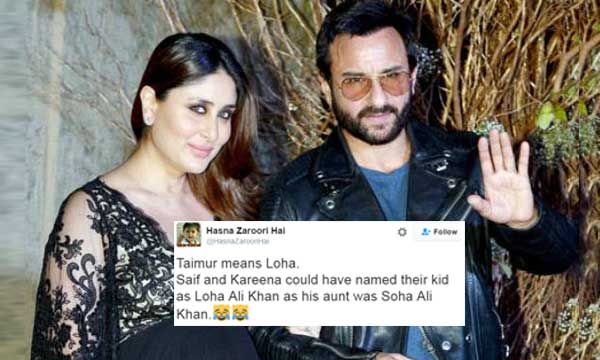 “Born with a Silver Spoon”  would have been the term for the new mother Kareen Kapoor Khan and father Saif Ali Khan’s newborn bundle of joy, Taimur Ali Khan Pataudi. Unfortunately for the little lad, that was not the case, instead, his name became of the most trending trends on Twitter the moment his name was released.

Receiving a mixed reaction from Indians, and some Pakistanis, a new controversy has taken over Twitter in regards to baby Taimur’s name. For those who do not know why this controversial trend is going viral, you can scroll down to the history of Timur Lang, the conqueror and the founder of the Timurid Empire in Persia and Central Asia before coming back to the reactions.

Taimur means Loha.
Saif and Kareena could have named their kid as Loha Ali Khan as his aunt was Soha Ali Khan.😹😹

Taimur Ali Khan!
And today I witness a new form of chid abuse.#SaifAliKhan & #KareenaKapoor guys you could have Googled a better name.

Please guys stop mocking the kid.
His parents already took care of that by naming him Taimur Ali Khan.#SaifAliKhan #KareenaKapoor

You know you have arrived right when you start trending from the time you are born. #TaimurAliKhan

What's in a name? I dare you to ask that now Shakespeare #Taimur #TaimurAliKhan

Yes it is odd but what's in the name?? #TaimurAliKhan

Meanwhile, the whole of Bollywood is rejoicing over Taimur’s birth and are congratulating the proud parents!

Nirbhaya Rape Prime accused was named "Ram" did he behaved like one? Then what make u idiots think that #TaimurAliKhan will be a warmonger?

The very fact that #TaimurAliKhan is trending in India shows the degree of joblessness in our nation.#WednesdayWisdom

So congrats to Saif & Kareena and a long happy life to their baby son. May #TaimurAliKhan have a happy & healthy life

So much hue & cry for #TaimurAliKhan name. Stop & think, that they have named him for meaning of the word and not on some historical ruler

In 1398, Timur invaded northern India, attacking the Delhi Sultanate ruled by Sultan Nasir-ud-Din Mahmud Shah Tughluq of the Tughlaq Dynasty. Timur crossed the Indus River at Attock (now Pakistan) on 24 September 1398. arriving in Delhi in 1398, to fight the armies of Sultan Nasir-ud-Din Mahmud Shah Tughluq, which had already been weakened by a succession struggle within the royal family.