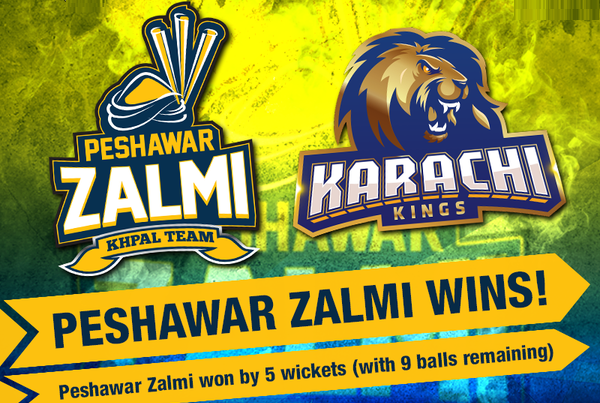 UPDATE: Peshawar Zalmi got a comfortable victory over Karachi Kings by 5 wickets and it can all over for Kings’ journey of PSL T20 2016 if Lahore Qalandar beats Islamabad United today in the second match. Kings is now at fifth position (lowest) with only four points.

Karachi Kings set a reasonable target of 153 runs (152-7) for Zalmis, Lendl Simmons was prominent with his 49 runs while Karachi’s run machine Bopara played 23 runs knock. Zalmis chased down easily in the end after recovering from early damage done. Brad Hodge played a match winning innings of 85* runs off just 45 balls and finished the match with 1.3 overs to spare.

REMATCH the first battle of this innings, as Amir snaffled Hafeez after being hit for four. #KKvPZ pic.twitter.com/chzB155bE9

Take a look at some of the moments of the first innings so far… #KKvPZ pic.twitter.com/rG8zCVUR0t

Karachi Kings will be up against Peshawar Zalmi today and will face a ‘make or break situation’ to qualify for the playoffs of HBL PSL T20 2016. It is one of the greatest challenges for the Kings but they have the capability to achieve this target; however, it will be a pressure game and they have to give their best to qualify for the next round.

Team Karachi has been unlucky in the past; despite some very close fights, the team could not turn them into victories.

England’s Owais Shah has joined to replace James Vince and his inclusion can make a difference because he can hit the ball well all across the boundary; it will be interesting to see whether he is ready for the big game or not.

Though we have seen some pretty good individual performances from Karachi players, they will be hoping for a star performance again from Ravi Bopara, who has been outstanding in this league so far.

Peshawar Zalmi will definitely try to win this game to gain the high points on the points table and will also want to go to the next stage with victory. For Karachi Kings, it’s a do or die situation today.