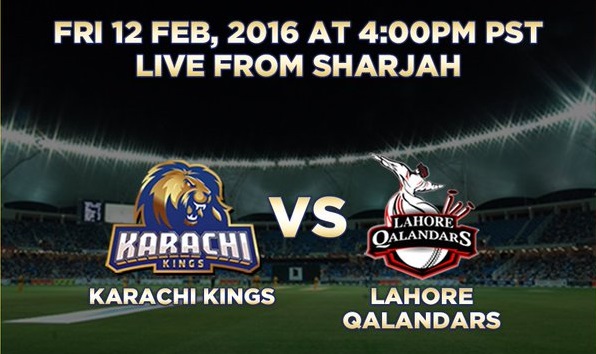 UPDATE:The all round performance of Ravi Bopara soared another victory for Karachi Kings who defeated Lahore Qalandars by 27 runs easily in the end. Karachi Kings set a target of 179 runs for Qalandars which they fell short of despite 90 runs opening stand in first 10 overs.

Man of the Match Ravi Bopara first scored unbeaten 71 runs on 43 balls and sent six Qalandars back to the pavilion on his bowling. This is not only best all round performance in PSL T20 2016, but also in overall T20 format. 16-6 is the best bowling figure by any bowler in this league. Ravi Bopara has also become the leading run scorer (210) and leading wicket taker (10) in this competition.

The Kings and Qalandars will be once again in action today against each other in 12th match of PSL T20 2016 in Sharjah Cricket Stadium. Both teams are under performing in this tournament and by far only have one victory to their credit after playing against all four teams. For this match Karachi Kings has a psychological edge over Lahore Qalandars as they only game they won was against Azhar Ali and company.

A huge crowd is expected to come in to see this match as Friday is weekly holiday in UAE, so a jam packed Sharjah stadium would be anticipating a thrilling contest.

If we look into previous performances, Karachi Kings despite of losses, have at least put up a fight in every match , but Lahore Qalandars’ matches have been one sided and they struggled to show some classy cricket except Umar Akmal’s blistering innings against Gladiators.

Lahore Qalandars is again relying on Umar Akmal and let see if he lives up to expectations, otherwise it’s a must win game for both rival sides to keep them inn in the competition.