Hrithik Roshan has been quite in the limelight lately due to his controversial social media feud with the Bollywood actress Kangna Ranaut. The actor revealed the first look of his upcoming film ‘Kaabil’ on Instagram and Twitter.

Blinded by a million eyes watching me…when in fact I am the observer ,I am the watcher .. The minds eye sees all. #Kaabil

Kaabil’s first look reveals Hrithik’s light green eyes and the reflection of a lit candle. The movie’s tagline is ‘The Mind Sees All’.

The gorgeous actress Yami Gautami plays the lead opposite Hrithik; Hrithik and Yami are playing the role of blind people.

Blinded by a million eyes watching me…when in fact I am the observer ,I am the watcher .. The minds eye sees all. https://t.co/24deU3PJaP

The first look reveals flaming candles and burning eyes, indication that the story line is going to be similar to Sanjay Gupta’s recent films, Shootout At Wadala and Jazbaa.

Kaabil is scheduled to release in January 2017, likely to clash with SRK’s Raees. 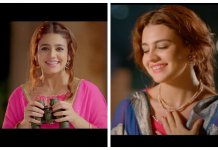